I've decided to go out on the limb and write a post which isn't related to one of my groups to reflect and outline my reading plans for this year.

I wanted to clear my Kindle Backlog last year. In fact, I've been doing that the last 2 years, and progress has been good-ish. 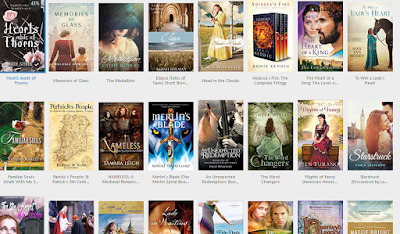 Although I have 129 books on my Christian Fiction To Read list on my Kindle, I have over 200 on the Read list, and I now have none dating from before December 2015. Which means that all the books on there were purchased in the last 4 years. Since I've had Kindle since summer of 2011 surely that counts for- er something? 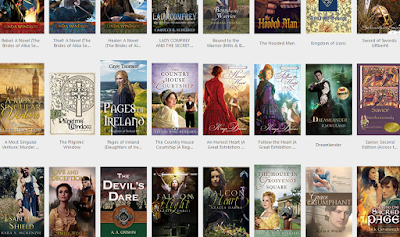 There are several titles that I've absolutely made it my  Resolution to read this year including To Shine With Honor a novel written by my online friend Scott Amis, and which I've had on my Kindle since late 2016. Also I AM going to read books 2 and 3 in Deborah Kinnard's now sadly out of Print Faith Box Trilogy; and hopefully Defender of Jerusalem, 500 plus page long sequel to Knight of Jerusalem by Helena P. Schrader.

On my physical books, I'd like to finally get around to The Apothecary's Daughter by Julie Klassen.

I'd also like to clear the backlog of some of the titles on Netgalley. I mean there aren't that many in the more than 3 months old section now. Only 12 to be exact, but a few might have been on there for years. 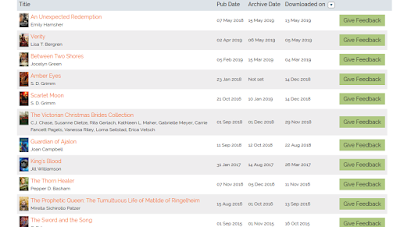 To reduce, or at least keep on top of my To Read List I've been adopting a fairly strict policy of limiting the amount of new books I'm buying.
Now, I won't usually buy it unless its a standalone that I really like the look of part of  a series I've already started or by an author I've read before. Or a title that I read from Netgalley, or listened to as an Audiobook and I now want to own for myself.

Honestly, buying 3 or 4 books in a series because they were on sale, without ever having read anything by the author before and having no idea whether I'll like them now seems like a terrible plan. That's why I've also been ruthless and culled out some of my books. Generally, these were titles from say, the Middle of a series, where I did not have the first or subsequent book and I'd only purchased because they were on sale or free.

Some of these titles I will probably end up reading by Kindle Unlimited, and then buying them again afterwards if I like then. Although Amazon UK seem to have changed the rules with KU and made it so you can't take advantage of the latest offers if you've had a Kindle Unlimited subscription in the last 6 months.

Of course, that doesn't mean I won't read any newer books, because of course several of my favourite authors have new books out this year. The usual suspects: Roseanna M White, Sarah Ladd, and Michelle Griep are among them, but there will be other series to finish, and undoubtedly new books to discover.

I've been on Netgalley voting on the 'Most Anticipated' reads for the year, most of which I will try to get my hands on. Of course, I've also created my Medieval Christian Fiction List on Goodreads for this year.
Its an annual event I've been doing since 2015, and I add titles throughout the year.

I've mad some beautiful buttons to link to the List for this year and last year. Have a click. 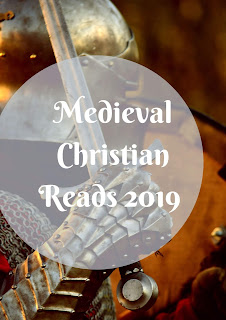 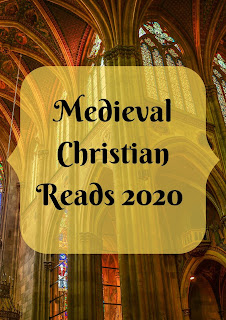 Maybe this year I'll go out there and create one for other periods, but this is always a bit of fun. Feel free to vote, but please read the instructions before voting.

So, these are my plans for the year. Hopefully by summer I'll have made some good progress. What are your goals for the year? Do you have any of the same books as my on your TBR list?