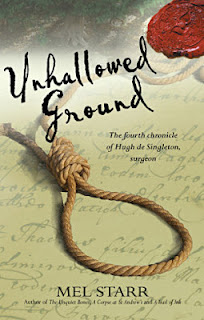 Review of 'A Corpse at St Andrew's Chapel' by Mel Starr 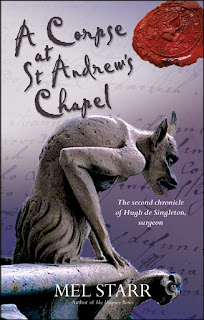 
Opinion: By way of a brief introduction the series is set in the late 1300s (14th century) and the protagonist Hugh de Singleton is the younger son of a knight who trained as a surgeon (different from a physician) who was appointed Bailiff of the Oxfordshire Village of Bampton on the Weald after treating the Local Lord.

As medieval murder mysteries go, the Chronicles of Hugh de Singleton are rather good and generally seem to be clean reads.
Some description of murders does feature in this story. It is not particularly graphic (I would say the description of the crime on the blurb makes it seem gorier then it  was in the actual book).

The characters do not seem to dwell on nor does the storyline rely overmuch on graphic and gory content, so overall there does not seem to especially objectionable for in this regard  a novel of this genre.

The novel could be rather slow moving in places, as the process of detection and discovery often forms the basis of the story, and because the novel is mostly set in a small town, there is no very high drama. I could not really get on with the character of Hugh at first in this particular novel, as he  was in the habit of ogling and fantasising about women in a way that can make him appear rather too preoccupied with the opposite sex.
His other great love was food, which he also seemed to devote a great deal of attention to, and hated missing meals even when something like a little murder required his presence away from his lodgings in Bampton Castle.
Towards the end, when he did not devote so much thought to these two things and started to do some serious investigation, Hugh seemed to grow on me a little better, and by the time I finished the novel I had read a later installment, so I had a more rounded view of him overall.
Finally, Hugh’s swift recovery and resumption of duty after getting knocked on the head a number of times in this novel does not entirely seem realistic.  Not many people would be staying up all night to watch for a miscreant so soon after being knocked out I would have thought, and Hugh did just seem to keep getting spotted and swotted, even when armed with a dagger.

History:  Hugh's eating red meat at Easter or Lent did not seem consistent with the religious teachings and customs of the time period. Aside from the above, the story did seem well researched, and fairly plausible, and the language not too jarringly modern. This said, and accents of some of the poorer characters who were not of noble blood did seem rather odd- not like Oxfordshire accents at all which is in the South of England.

Christianity/Morality:  Even though Hugh does subscribe to the teachings of the 14th century scholar and theologian John Wycliffe, who did not believe in notions such as transubstantiation or the veneration of relics, Hugh does still attend some of the festivals which involve such as these, and is perhaps not quite so bold in admitting his religious sympathies as others.
That said, I would not say that Wycliffe's ideology is prominent enough to give a 'Protestant' flavour, but not one that is too anachronistic and that the religious content of these novels is presented in such a way as too be off-putting for modern Protestants. 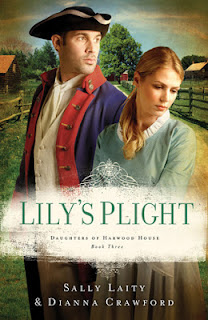