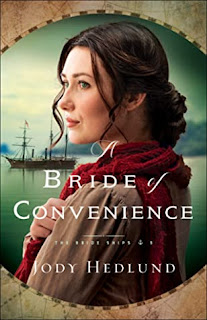 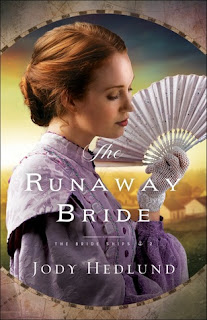 Haunted by mistakes in her past, will she ever again trust her heart to another?

Wealthy Arabella Lawrence flees to British Columbia on a bride ship, still bearing the scars of past mistakes. One of the few single women in the boomtown, she immediately attracts suitors, but she is determined not to find herself trapped again by making a poor choice.

Vying for her hand are two very different men. Lieutenant Richard Drummond is a gentleman in the Navy, held in high esteem. Peter Kelly is the town's baker who has worked hard to build a thriving business. He and Drummond not only compete for Arabella's affections, but also clash over their views of how the natives should be treated in the midst of a smallpox outbreak.

As Arabella begins to overcome her fears, she discovers someone in dire need—a starving girl left behind by her tribe. Intent on helping the child, Arabella leans on Peter's advice and guidance. Will she have the wisdom to make the right decision, or will seeking what's right cost both her and Peter everything?

I finally got around to reading this book after more than a year. I liked it a lot, and it was quite strong for the second novel in a series.

Arabella and Peter were both great characters and the story did a good job of exloring some of the social issues and condiitions facing the characters. Arabella was meant to represent a woman of the middle classes instead of a working class poor woman. For the most part, her character seemed realistic, although I think her secondary love interest was a bit of a charicature.

I didn't think the faith messages were heavy handed either. The characters had doubts but they did not seem contrived, nor were they condemned for having them.

I was not sure about all the langauge. The term "bakehouse" seemed to be an Americanism, but I did not notice very many of these.

Thanks to Bethany House for allowing me to read this title. I was not required to write a posiitve review and all opinions expressed are my own. 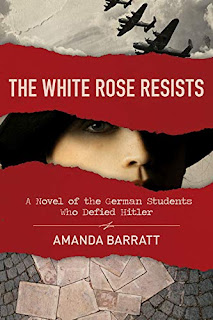 Inspired by the incredible true story of a group of ordinary men and women who dared to stand against evil.

The ideal of a new Germany swept up Sophie Scholl in a maelstrom of patriotic fervor--that is, until she realized the truth behind Hitler's machinations for the fatherland. Now she and other students in Munich, the cradle of the Nazi government, have banded together to form a group to fight for the truth: the White Rose. Risking everything to print and distribute leaflets calling for Germans to rise up against the evil permeating their country, the White Rose treads a knife's edge of discovery by the gestapo.

Annalise Brandt came to the University of Munich to study art, not get involved with conspiracy. The daughter of an SS officer, she's been brought up to believe in the f�hrer's divinely appointed leadership. But the more she comes to know Sophie and her friends, the more she questions the Nazi propaganda.

Soon Annalise joins their double life--students by day, resisters by night. And as the stakes increase, they're all forced to confront the deadly consequences meted out to any who dare to oppose the Reich.

A gripping testament to courage, The White Rose Resists illuminates the sacrifice and conviction of an unlikely group of revolutionaries who refused to remain silent-no matter the cost.

Beautiful story. I've seen the movie about Sophie Scholl but this really bought her story and that of her companions to life. The courage and heroism of the young students who opted for passive resistance when each faced with the horrors of the Nazi regime and the immorality of the Fuhrer's vison. The girls obviously weren't soldiers on the front, but each came to terms with what was happening in their country in various ways.

Although I knew how the story would end (at least for the Scholls) I found myself rooting for them all the way through and listening through gritted teeth at their increasing reacklessnes. These were students barely out of their teens after all, whose passion got the better of them in the end.

Like her last novel about Deitrich Bonhoeffer, Amanda Barratt has given us another story about shining lights and the power of love in the midst of evil, and the people who were willing to stand up to it in their own way.

Thanks to Negalley for approving my request for this title. I was not required to write a positive review and all opinions experssed are my own.