Today I am including one of three books (well OK, two books and one audiobook) that are on my Currently Reading List.
I've never read anything by Laura Frantz before, although I understand this book is very popular. Its the first of two books coming out this year about people from Scotland who get sent to America in the 1750s.

When you notice a lot of books with a similar setting coming out in a short time like that, it usually means they are following some fashion. In this case, I think the proliferation of stories set in mid 18th century Scotland (or featuring characters from there), are a based on the success of the Outlander series. I've never watched it and don't particularly care to do so.


The synopsis for the book A Bound Heart reads:

"Though Magnus MacLeish and Lark MacDougall grew up on the same castle grounds, Magnus is now laird of the great house and the Isle of Kerrera. Lark is but the keeper of his bees and the woman he is hoping will provide a tincture that might help his ailing wife conceive and bear him an heir.

But when his wife dies suddenly, Magnus and Lark find themselves caught up in a whirlwind of accusations, expelled from their beloved island, and sold as indentured servants across the Atlantic. Yet even when all hope seems dashed against the rocky coastline of the Virginia colony, it may be that in this New World the two of them could make a new beginning—together."

My First Line today is from Chapter 13, which I am currently onto (nearly finished in fact) in the Audiobook. 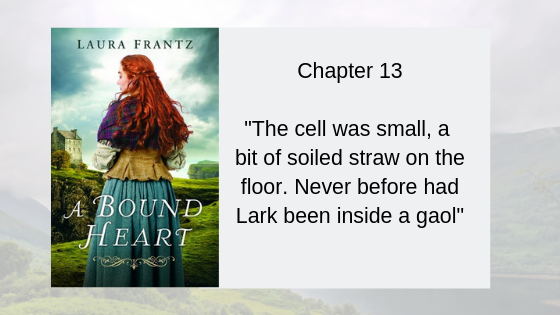 Whilst the book seems good so far, I have noticed a few mistakes and misunderstandings relating to British history and culture.

The most noticeable is the common misconception that the Jacobite Rebellion an English vs Scottish conflict. It wasn't: it actual fact it had more to do with religion was was really more a matter of Catholic vs. Protestant since many Protestant Lowland Scots were opposed to Bonnie Prince Charlie and the Jacobites.