The Unveiling by Tamara Leigh 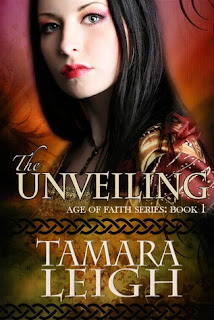 12th century England: Two men vie for the throne: King Stephen the usurper and young Duke Henry the rightful heir. Amid civil and private wars, alliances are formed, loyalties are betrayed, families are divided, and marriages are made.
For four years, Lady Annyn Bretanne has trained at arms with one end in mind—to avenge her brother’s murder as God has not deemed it worthy to do. Disguised as a squire, she sets off to exact revenge on a man known only by his surname, Wulfrith. But when she holds his fate in her hands, her will wavers and her heart whispers that her enemy may not be an enemy after all.

Baron Wulfrith, renowned trainer of knights, allows no women within his walls for the distraction they breed. What he never expects is that the impetuous young man sent to train under him is a woman who seeks his death—nor that her unveiling will test his faith and distract the warrior from his purpose.

The Unveiling is another book for which I have somewhat mixed feelings.
Truthfully, I did enjoy it in parts especially with the rich descriptions of some of the settings like the fortress where Wulfrith’s mother lives, and the some of the period details did seem well done. Also, the historical backdrop allowed for tension and drama which could add to the story. The first half may have been better, before the ‘unveiling’ with some interesting descriptions of military training, though the second half had its moments.

As to the characters- well the main ones were interesting, with Wulfrith the strong, commanding and aloof trainer of knights, and the tomboyish Annyn, intent on avenging her brother’s death on the man she believed killed him, which allows for some exploration of the subject of revenge and forgiveness from a Christian context . Both seem well drawn and believable, but I had one major issue with Wulfrith. This was that though he was meant to be a man of intense faith and devotion, prayed regularly and tried to behave with honour, where his personal life was concerned he came across as a total lecher.
Other reviewers have referred to the mention of him having visited prostitutes, but it was more than that he seem totally preoccupied with women, and unable to be keep his hands off Annyn if they were alone for more than a few minutes, or indeed his mind off her. Also he didn’t seem to think that visiting harlots was in any way contrary to his Christian conviction (which may have been a reflection of the time) and his excuse for his snogging Annyn that he ‘had been too long without’ a woman just made him seem all the worse.

Nor were his brothers much better as they liked to partake of such pursuits as him with harlots, or common serving girls in the stables (which hardly anyone seemed to have a problem with). I can understand that Mrs Leigh didn’t want her characters to be perfect as that isn’t realistic, but I really don’t think all the men had to be promiscuous.

Then again, Annyn wasn’t always entirely innocent either, from being afraid of Wulfrith touching her, she might then be snogging him and then slapping him afterwards, at one point she even asks him to go all the way and fornicate with her-which he would not do as he thought it was sinful (but not to do so with prostitutes).
I understand that this novel was ‘romance’ and I think their behavior was better at the end when Wulfrith demonstrated he really loved and cared for her, but do characters in romantic fiction have to be totally consumed with ‘passion’ as to be virtually unable to control themselves? Although nothing immoral actually happened before their marriage, the some of the scenes with Annyn and Wulfrith came across as being in bad taste.

The only other issues I had were that whilst the author clearly tried to make the language seem authentic, there definitely seemed to be an influence of modern ideals, especially on Annyn’s part who didn’t like sewing or womanly pursuits, preferring sword fighting.
That worked sometimes, but for a girl to step into the middle of the practice field when the men were busy, and demand Wulfrith cross swords with her seemed a little unrealistic and clichéd, and really a woman doesn’t’ have to be good with a sword to be strong. She also generally thought it unfair that men didn’t have to wear wedding rings or swear to ‘serve and obey’ their wives in their wedding vows. Something of an unrealistic expectation methinks.

Finally there was the way the characters kept referring to Annyn’s brother’s death as having happened ‘at Lincolnshire’, which seemed a little odd geographically. Normally one would say something happened or a person who saw it was ‘at’ a specific town, city or other place, but Lincolnshire in none of these, it is a county and a reasonably large one at that. Thus to say someone was ‘at Lincolnshire’ doesn’t entirely make sense and an English person might be left thinking ‘yes but where in Lincolnshire?’.

Overall, The Unveiling is a good story, and seems quite well researched, but I think it could have been better done, especially where the romantic content was concerned.
2 comments: