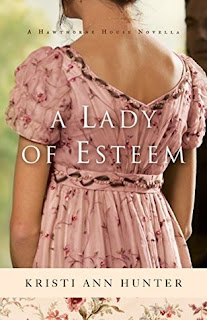 Miss Amelia Stalwood may live in London at her absent guardian's townhouse, but she's never actually met any nobility, and instead of aristocrats, her closest friends are servants. Quite by happenstance, she's introduced to the Hawthorne family and their close family friend, Anthony, the reformed marquis of Raeburn.

They welcome her into their world, but just as she's beginning to gain some confidence and even suspect she may have caught Anthony's eye, she's blindsided by an unexpected twist in her situation accompanied by nasty rumors. Will she lose her reputation when the world that has only just accepted her turns its back on her, or will she rest in the support of the friends who've become like family and the man who's shared his faith and captured her heart?

A Lady of Esteem is an e-only novella that gives an exciting introduction to Kristi Ann Hunter's new Regency romance series about the aristocratic Hawthorne family! Includes an extended excerpt of Kristi's debut full-length novel, A Noble Masquerade.

I have had somewhat mixed experiences with Christian Regencies. Some have been overly mushy on the Romantic side, or implausible and silly. Others have been downright gross, with uncessary rape scene or other objectionable content, and so riddled with Americanisms that its almost impossible to take the characters seriously.

Others have been good, faithful to the style and setting and generally satisfying. This was one. Its really just a sweet, fun little story, though it does have a more serious side with the underlying message. Yet this was not delivered in a heavy-handed way.
Instead, there's plenty of good humour and a decent story about a lovable social misfit who falls for a formerly rakish Marquis (with a little help from his friends), and thier choices and challenges along the way.

The names are credible for the setting (Regency stories that have names which are clearly made up to outlandish do get to me), and the American author's knowledge of British geography and social customs seems solid. I did spot a few Americanisms (a reference to 'stepping out onto the sidewalk' amongst them- we call it the pavement), but these were not too jarring, as the characters otherwise seemed delighfully but not stereotypically British- and that's coming from a Brit.

The Romance was also well handled. Fairly light without being too mushy, sickly sweet, or just resulting in really inapproporate behaviour- for the most part. There was some kissing, but even that was not overdone.

Altogether, its a great introduction to this author. I look forward to reading her full Length novel, A Noble Masquerade. Its also free on Amazon- so well worth the effort.
No comments:

The Heart of Arcrea- Nicole Sager 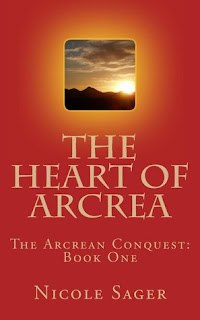 “He who discovers the heart of Arcrea and joins the hands of the seven regions will be king.”

Set during a forgotten age of kings and queens, knights and nobles, wise-men and warlords, The Heart of Arcrea follows the story of Druet the blacksmith, who, hoping to free his father from an unjust imprisonment, sets out on a quest that will solve an ancient riddle and crown a man as Arcrea’s first king.

A host of memorable characters join Druet on his mission of justice, but opposition quickly rises to test their level of commitment and their faith in God. Will the dangerous wilds of Arcrea and her seven oppressive lords succeed in bringing an end to Druet’s quest and crush forever the kingdom’s hopes for a just king? 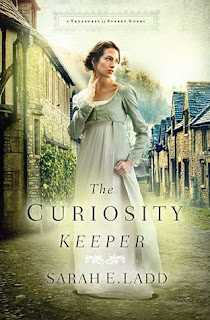 “It is not just a ruby, as you say. It is large as a quail’s egg, still untouched and unpolished. And it is rumored to either bless or curse whomever possesses it.”

Camille Iverness can take care of herself. She’s done so since the day her mother abandoned the family and left Camille to run their shabby curiosity shop on Blinkett Street. But when a violent betrayal leaves her injured with no place to hide, Camille has no choice but to accept help from the mysterious stranger who came to her aid.

Jonathan Gilchrist never wanted to inherit Kettering Hall. As a second son, he was content working as a village apothecary. But when his brother’s death made him heir just as his father’s foolish decisions put the estate at risk, only the sale of a priceless possession—a ruby called the Bevoy—can save the family from ruin. But the gem has disappeared. And all trails lead to Iverness Curiosity Shop—and the beautiful shop girl who may or may not be the answer to his questions.

Curious circumstance throws them together, and an intricate dance of need and suspicion leads the couple from the seedy backwaters of London to the elite neighborhoods of the wealthy to the lush, green Surrey countryside—all in the pursuit of a blood-red gem that collectors will sacrifice anything to possess.

Caught at the intersection of blessings and curses, greed and deceit, two determined souls must unite to protect what they hold dear. But when a passion that shines far brighter than any gem is ignited, each will have to decide how much they are willing to risk for their future, love, and happiness.

I really enjoyed Sarah Ladd’s debut ‘Whispers on the Moors’ Trilogy, so this first book a new series was greatly anticipated. I heard good things, saw good reviews, liked the author anyway, and appreciate Regency Fiction perhaps a little more than I used to.

The Curiosity Keeper was not by any means a bad novel. It has most of the elements known and loved in Regency Fiction- alongside a measure of mystery and intrigue- yet- and this is purely my personal opinion- I couldn’t really like it in the way I did The Heiress of Winterwood, The Headmistress of Rosemere by the same author.

It’s hard to pin down what this story seemed to be lacking for me- but dare I say, it just seemed rather dull and a little predictable. Don’t get me wrong, I don’t go in for stories that rely entirely on action at the expense a solid plot, or good characterisation- but despite some exiting scenes, it just seemed to trudge along- and I was able to guess (correctly) the location of the Ruby everyone was looking for quite early on.
Also, I don’t think I ever really found myself connecting with the major characters.

Yes, Johnathon was your typical Regency hero- dashing and handsome, who wanted to make his own way in life but had a strong sense of duty and honour- yes Camille was strong and beautiful yet vulnerable, but again, there just seemed to be something lacking. Maybe its that her actions did not always seem consistent with her personality, or that the characters, whilst pleasant enough, seemed a bit like 'stock' characters, typical of the genre.

This is a worthwhile read, and I would certainly have no trouble recommending. The lack of the sort of silly, mushy romance that gets on my nerves could certainly be counted as a plus. It just isn’t a favourite, nor do I think the author’s best.

I received this book free from Thomas Nelson via Booklook Bloggers for review. I was not required to write a positive one and all opinions expressed here are my own.
No comments:

New for 2015- The Last of Princess of Meigen- Rachel A. James 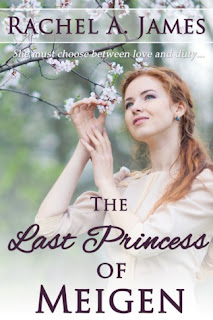 She must choose between love and duty...

A captivating tale of love and duty as the last princess of Meigen searches for her true purpose amidst conflict and betrayal.

It is 626AD, and the ancient Kingdom of Meigen is left vulnerable to neighboring Saxons. To unite the kingdoms and bring peace, Princess Alena must enter into a royal marital alliance. But when the handsome physician, Sherwin, befalls her, matters become complicated. Torn between obligations to her young son and country, she faces a difficult decision. Will Alena obey the king’s orders, or choose to follow her heart?

'The Last Princess' was a sweet, tale geared towards a young adult audience. It could also appeal to adults looking for a quick, undemanding read.

This book included many of the characters from the author's first book The Forgotten Princess of Elmetia that complement each other well.  For instance, the the lead character in this book, Princess Alena, finding love with one of the protaganists from the last book.

There was certainly enough action and intrigue to keep the reader interested, even if the characters could be a little bit one-dimensional. Still, Alena was an interesting character, struggling with her place in the world and the demands of society. I found very interesting the references to herbalism, and the various uses of herbal remedies- but I am sort of nerdy in that way.
Perhaps the romance was a little on the cliched side at times, and there were a few historical inaccuracies, but generally a good, clean read.

I recieved a copy of this book from the author for review. I was not required to write a positive one and all opinions expressed are my own.
1 comment: