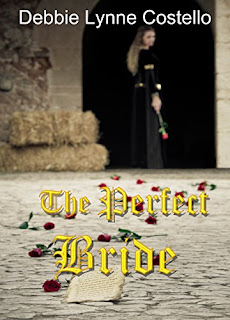 Avice Touchet has always dreamed of marrying for love and that love would be her best friend, Philip Greslet. She’s waited five years for him to see her as the woman she’s become but when a visiting lord arrives with secrets that could put her father in prison, Avice must consider a sacrificial marriage.

Philip Greslet has worked his whole life for one thing—to be a castellan—and now it is finally in his grasp. But when Avice rebuffs his new lord’s attentions, Philip must convince his best friend to marry the lord against his heart’s inclination to have her as his own.


Although this was described as a 'novella', its actually a decent length at 113 Kindle pages. Nevertheless, I got through it in just over 2 hours before work yesterday.
It was a lovely, short foray into late 14th century England, and although it complements the author's full length novel (with a couple of the characters from that one appearing in it), it can standalone as well.

The basic plot is of two childhood sweethearts who are clearly in love, but for various reasons don't think they can marry: Philip because of his career aspirations, and because he thinks he's not the man Avice needs.
Such a story could easily degenerate into cliche, but this one did not. It was original and well told, and also managed to avoid many of the pitfalls of stories set in the Medieval period, with a reliance on myths and misconceptions about the period. What was interesting is that the characters served a lord living not in a castle, but a Manor House. Its often (wrongly) assumed that everyone of remotely royal blood lived in fairy-tale castles. They didn't and this reflected that well.

Another couple of details were very interesting. Who knew there was such a thing as a 'talking' starling? I never knew it, but I did some research and found there have indeed been cases of European starlings mimicking noises from cars and cellphones, and even being taught to mimic human language.
I doubt I shall see the little birds, which are commonly seen in gardens in Britain, the same way again.

My only complaints were really related to the language: don't get me wrong, there was no swearing: but I did doubt the authenticity a couple of times. The nobly born characters seemed to have exactly the same vaguely Northern accents as the commoners, which did always not ring true. Unless they were born and raised in the Cumberland region, they would not have had the same accents.
Also, there was a reference to a character using a Gaelic, which also didn't seem credible for a 14th century English nobleman living in modern Cumbria.
Gaelic is a Scottish language: Cumberland did once have its own language or dialect, but linguists think it was probably more closely related to Welsh, and seems to have become extinct by the 12th century.

Despite that though, The Perfect Bride was a beautiful and very enjoyable story. Two hours well spent and thoroughly recommended.
I did receive a PDF from the author for review, but read the Kindle edition which I borrowed through Kindle Unlimited. I was not required to write a positive review and all opinions expressed are my own.

Debbie Lynne Costello has enjoyed writing stories since she was eight years old. She raised her family and then embarked on her own career of writing the stories that had been begging to be told. She and her husband have four children and live in upstate South Carolina. She has worked in many capacities in her church and is currently the Children's Director. Debbie Lynne has shown and raised Shetland Sheepdogs for eighteen years and still enjoys litters now and then. In their spare time, she and her husband take pleasure in camping and riding their Arabian and Tennessee Walking horses.

Can you tell us a little bit about yourself?

I’d love to! I used to think I was an extravert because I certainly am not an introvert, but I think I fall somewhere in the middle. I am a people person, but I’m not always the greatest at starting conversations when I meet someone new—unless I know of something we have in common. I am a person who lives by lists. I love to check things off and have even been known to add something to my list that I did just so I can check it off! I am a go getter. I like to get things done. Now that isn’t always an asset let me tell you. But I am the type who if I see a job that needs to be done or an opportunity, I will be the one who volunteers. Sometimes I forget that my schedule is already bulging at the seams. When we moved and found our new church 11 years ago, our pastor was asking us what we did in our last church. As I was telling him some of my jobs my hubby spoke up and said, “all jobs for my wife will be run through me first. She doesn’t know how to say no.” LOL.

What do you do when you are not writing?

Oh my. Well, if we are talking this year, we are building our house. I am out working, drilling holes, pulling wires, wiring fixtures. I will be tiling the whole house, painting, and helping my husband put up the hardy back siding as well as putting a stone facing on the front basement wall and chimney. I also keep my 7 year old mini-me granddaughter for 3 to 4 days and nights a week (she’s in bed sleeping right now). I fix meals for us and my vegan hubby. Keep the house up…okay… this one maybe not as well as I should! And I feed and care for our horses, dogs and ducks. The ducks being more work than the dogs and horses!

I have always loved writing. My mother saved a lot of the stories I wrote when I was 8 years old and up and gave them to me when I started writing again. I went to college for journalism but married and started a family shortly after so never finished my degree. We chose to homeschool my last 2 kids and when they reached HS they really didn’t need my help constantly, however, I needed to be there in case they did AND to keep them on track and motivated. ;) One day as we sat at the dinner table and I told my hubby about the book I had read and how I thought it could have been better he said, “Why don’t you write a book?” I thought about it for 2 weeks then sat down and started to write. That was about 11 years ago now. I finished that book in 5 months.

How did you choose the genre you write in?
It was easy for me because I loved the medieval time period and read so much in that era. So I naturally gravitated toward that. But I also enjoy the 19th century, too.

Where do you get your ideas?
I wish I could say I had this dream, like many authors do, but I don’t. I usually have a nugget of an idea, a what if? And then I start expanding until it starts speaking to me.

Do you ever experience writer’s block?
Oh do I ever! I just came off writers block with this book. It is NOT fun! High stress can cause that with me. It seems to drain my creativity and I struggle for each word and sentence. But God in His great mercy has lifted the fog from me each time.

Is there any particular author or book that influenced you in any way either growing up or as an adult?
I loved Beverley Cleary as a child. I loved Ribsy and Henry. I was a tomboy so could relate to the boy in the book and I have always loved animals. I was forever bringing home an injured animal and trying to nurse it back to health. I fell back in love with reading after having all four of my children and my daughter was a teenager. We read Gilbert Morse’s books. It was his writing that rekindled my love for reading.

Can you tell us about your challenges in getting your first book published?

Yes! Medieval in the Christian market is not accepted with publishers unless it is YA. I don’t write YA so getting a medieval published was impossible. Even my agent suggested I self-publish. So that’s what I did. But even that wasn’t easy. There is so much to do to get a book ready for publishing. SOF went through 3 in depth edits. I had to learn how to format (Thank you Marylu Tyndall!), find someone to make a good cover, learn about ISBN numbers, and so much more.

Is anything in your book based on real life experiences or purely all imagination?

It is mostly fictional. I do talk a bit about the Peasant Revolt which is history and I try to give a flavor of the time period. It is a novella so squeezing those little tidbits with a limited word count is a bit more challenging.

How did you come up with the title?

This question made me smile. I agonized over this title. It went without a title while I was writing it, through my crit partner and even into my edits. It was while I went through my edits I got to one point in the book where the hero makes a realization. At that point the title hit me—The Perfect Bride!

May 7th  The Sword and Spirit
http://theswordandspirit.blogspot.com/

May 12th Stitches Thru Time
http://stitchesthrutime.blogspot.com/

And finally: a giveaway!