New for 2015- Oswald: Return of the King- Edoardo Albert 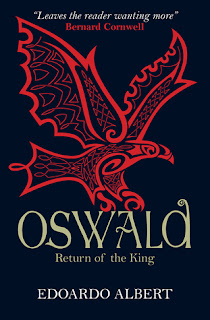 "The exiled family of King Aethelfrith of Northumbria arrive, after much hardship, on the island of Iona, where the monastery founded by St Columba has become a centre of worship and learning. Young Oswald becomes firm friends with a novice, Aidan. When Aidan professes his final vows, Oswald and his little brother Oswy are received into the church. As befits a young prince, Oswald learns to fight.
However, Aidan's example attacts him and he is on the point of deciding to become a monk when news reaches Iona that his half brother, Eanfrith, has been killed by Cadwallon, the king who defeated Edwin.

Oswald sails back to Northumbria and meets Cadwallon in battle, defeating and killing him. Oswald, now undisputed king of Northumbria, gives Aidan the island of Lindisfarne as his base.
But Penda, the last great pagan king in England, is raising troops against him ..."


The sequel to the first book in this trilogy  'Edwin: High King of Britain' was for me, long awaited. I remembered a little of Oswald’s story- for which the sources are sparse- but the wait was well worth it. The title is a conscious nod to Tolkien, of which it is, I believe legitimate to draw at least some comparison.
King Oswald of Northumbria, a seventh century Saxon King, was the inspiration for Aragorn- and Middle Earth was what Oswald’s people the Anglo-Saxons, called the earth. For once again Edoardo Albert has taken the material that gives the barest details and created a grand, moving and realistic historical drama recreating the lives of half-forgotten figures who lived in a period that is as much shrouded in myth as it is known from history.

It tells the story of an exiled Prince, who returned to his homeland to reclaim his Kingdom, and, once it was won, to spread the New Faith of Christianity which he had embraced. This led him to establish the great monastry of Lindisfarne, and other foundations that would become famous as centres of Early Medieval English Christianity
As a ruler, Oswald ‘flashed for a few short years’when much was against him- when fellow Kings said that no throne could survive when there were two brothers to compete for it.
His was a tale of a  a King who sought to bring hope to his people of brotherly love, loyalty, intrigue and sacrifice - tainted by betrayal, pride and mistrust.

The characters are 'real people'- flawed and relatable- this heroes genuinely heroic- yet not always having a heroic motivation for their actions.
As with the last book the often beautifully written descriptive passages helped re-create a far distant age and really transport the reader back to the time, to feel as if they are there with the characters as the story unfolds.  in the King's hall high on the fortress of Bamburgh , on the battlefield, sailing through the misty fens of East-Anglia. Vouching for and caring for them.
One problem with some historical fiction novels is the tendency to inject modern values, thoughts and ideas into the heads of historical characters- harder still is the avoid modern idioms and turns of phrase.
In this series- even the way that the characters speak evokes the world of Tolkien, and, for literary buffs- Old English and British poetry.
Some of my favourite passages included:

"But even the sea, first and masterless, had quietened at the command of her heart-Lord. If he had chosen Oswald, she would not hold him back for her mother fear.

“We are all afraid…Death takes…glory fades, deeds are forgotten. In a generation, who will remember out names? But there is a hope in the new ways: a hope of life, a hope in death, a hope even in defeat”.

“When I was a boy, all I wanted was to be a warrior, to wield sword and win fame…but now I am glad the story is greater than sword glory”.

My only complaints were that the Oswald’s actual reign seemed to take something of a back foot. He didn’t even take up the crown until halfway into the novel- and the section devoted to his rule is nearly three quarters of the way through.
Much time is devoted to the preliminaries- mostly the warfare which ravaging the Kingdom of Northumbria, waged by rival Kings who Oswald had to defeat and bring to heel. This much of the first part of the book is the backstory about how he became King, in which relatively minor characters from the last book get a lot of attention.

One such characters was Coifi, the former pagan priest who ostensibly converted to Christianity it the last book. The characterization of him here was- dubious to say the least. In the last book, it seemed to be implied that his supposed supernatural ‘powers’ of prophecy were a delusion, and he was something of a powerless charlatan, who realized the gods he served held no power. Here, it is implied many times that he really can see into the future- when he goes into trances, his ‘visions’ often prove uncannily accurate.

One minute he claimed the gods abandoned him- but then claims they have given him is abilities back when he gets his visions again. I almost felt the author was trying to cast his as a Gandalf like- character- when such was really not needed and I feel is not appropriate- especially in a work of historical fiction by an ostensibly Christian Publisher.
It is almost counter-productive to have a figure to whom who believes the gods have given him power- and whose power seems very real- when other characters are shown abandoning the worship of those capricious gods because they believe it can give them no hope.

Also, in a couple of places some details seemed confusing. Perhaps the last section seemed too ‘rushed’. Oswald went from gaining his throne, to everyone calling him High King very quickly, one I sometimes found it hard to recall when the other kings had given him their allegiance. In some places, also, there seemed to be little sense of the passing of time- so until we were told that someone’s child was so old, it was hard to keep track of how much time had passed.

Finally, it may be pertinent to mention that readers seeking a story with a happy ending may be disappointed. This novel is true to the history of the period, which was frequently violent and sometimes tragic.
Yet is it not a story entirely devoid of hope. Those seeking a realistic work of historical and literary fiction, which explores some deeper issues without being preachy or clichéd, and is free of gratuitous sex, excessive, unnecessary violence, or plain silliness which plagues some historical dramas may well find what they are looking for here.

I received an ARC of this book free from the publisher for review. I was not required to write a positive one, and all opinions expressed are my own.
2 comments:

The Forgotten Princess of Elmetia- Rachel A. James 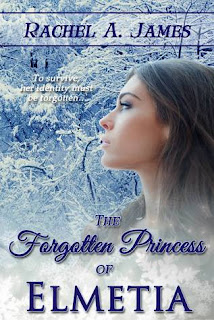 "It is 616AD, and one fatal night the ancient Kingdom of Elmetia falls. Saxons kill the Elmetian King, and capture Princess Teagen. Teagen poses as a slave girl and works for the Saxons in the Kingdom of Deira, until she discovers her brother is alive. She finds a way to escape, and her path crosses with Ryce the Warrior.

Struggling with his past, and angry against the tyrant Saxon king, Ryce helps the princess in pursuit of her brother. But just as the connection between them intensifies, obstacles get in their way. The Saxon king now wants vengeance, and will stop at nothing to get it"


I picked this book almost as soon as I realized it was written by a British author. They are few and far between in the Christian Historical Fiction Genre (and I naturally gravitate towards my fellow country people), and because am fascinated by Britain in the seventh and eighth centuries. The period of warrior Kings and saints, when the disparate Anglo-Saxon Kingdoms were gradually converting to Christianity. The world which inspired Tolkien’s Middle Earth.

This was certainly a very sweet and very heartfelt Christian story, which would certainly appeal to young girls obsessed with Princesses, or teens looking for a clean romance with a deeper theme behind it. On that level, I did in some sense enjoy the book- but- (here it comes), I do prefer my historical fiction to be more realistic and plausible- in other words to really get a ‘feel’ for the time.
I understand that this is Historical Fantasy, rather than straight Fiction, but for me the main problem was that there seemed to be no real sense of period. Swords and some of the clothes aside, it could have been set is almost any age, and didn't really do the justice to the time.
Perhaps I expecting too much and all along consciously comparing it to the works of Edoardo Albert, which are set at about the same time and include some of the same characters- but are of a very different style which this author was not trying to emulate.
Yet some of the details were jarring which really did not help- like the many references to the ‘Hospital Office’ were the physician Sherwin is to be found- behind his desk- where an Apple Mac and filing cabinet might not have been too much of a surprise.

In terms of the style, this seemed to be one of those stories that seems to rely strongly on action- upon the characters being in danger or peril much of the time, in the midst of thier blossoming relationship. The romance and Christian theme added something, but maybe things could have been padded out a little more?

Also, the characterisation, whilst suitable for the genre and target audience, did not always seem very strong. Princess Teagan was a little too perfect, yet often whiny when people told her to do something she didn’t want to. She and most of the good guys seemed invincible, able to survive assassination attempts, major injuries and falls from cliffs- when the baddies in the battle scene could be killed with a single sword trust.
I was a little discomfited by the depiction of King Edwin of Northumbria. I appreciate that he was meant to be the villain (and the descendants of the Celtic peoples of Britain probably still is regarded as such) but he was very much the stereotypical indolent caricature of a villain- cowardly, oafish and rather stupid. Hardly believable as the warrior King of history, whose power stretched over most of Britain.
Overall, this is a worthwhile story with a strong Christian message that does not demand too much of the reader. It would very much appeal to the target audience, and is worth a read for adults, but it’s just not a favourite. However, I would certainly consider reading more by this author, and see her writing develop.
No comments: