Review of Road of Vanishing by Robin Hardy

Road of Vanishing- Book 4 of the Latter Annals of Lystra
★☆☆☆☆ 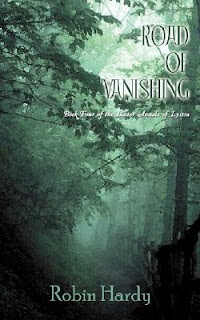 "Thirteen-year-old Chatain Henry has disappeared. Fearing that he regrets abdicating the throne to his guardian, Surchatain Ares, Commander Thom wants to place a bounty on his head. But when Thom captures a slave trader who claims to have sold Henry, Ares takes it upon himself to go look for him.

And the road he must travel is rumored to end at a portal that takes travelers to unknown realms. Because his young wife Nicole is the only one who can see the portal, she must go with him. While Nicole and Ares are gone, the Chataine Renée finds ample opportunity to wreak mischief with their five-year-old twin daughters, as well as with her husband, the Counselor Carmine, who is desperately trying to stay sober. For Carmine knows something about the portal that no one else has guessed."

Opinion: The book is slow-moving and the ‘action’ almost painfully repetitive (consisting of much to-ing and fro-ing through the mysterious portal that allows people to travel through time and space) until about halfway through the novel, when something actually begins to happen and we are introduced to the indelibly evil and tyrannical, yet unintelligent villain, who supposedly terrorizes his people and rules by fear but is about a menacing as a 5 year Old’s home-made Halloween costume. Rather apt considering the way that the baddie and his minions had been going around wearing  'scary' black costumes to wreak their evil deeds.

After his demise there is a lot of corny Indiana Jones/Tomb Raider style action and predictable ‘narrow escapes’ from peril including scaling walls, donning disguises, stealing guards uniforms, creeping though conveniently placed tunnels and opening secret sliding panels. There is even one passage in which Ares fight with a sword in one hand and a whip in the other, seemingly emulating dear Old Indy all the more!

The armies of the villain are useless  even though they are supposedly trained soldiers they cannot even mount an effective attack against Ares and him small force of newly freed slaves they outnumber several times over (these slaves were  of course  sparsely guarded by soldiers and who just happened to have a convenient stash of weapons at their disposal). As always Ares and friends beat them easily with his ‘quick thinking’ against a foe utterly incapable of out thinking him or anticipating his schemes.

As usual there are a whole series of seemingly insurmountable and dangerous crises threatening the  heroes, either as a result of the actions of the  one dimensional baddies or the usual ‘political intrigue’ which seems to get more far-fetched or absurd for the characters apparent inability to resolve it themselves.
The danger to the heroes increases as usual  towards the end, and when it seems as though all is lost, Ares gets saved just in time.
Then the author tries to squeeze yet more tension and peril into the remaining few chapters even when the predictable resolution (already hinted at) looms inevitably overhead. The ever corny happy ‘everything goes back to normal in Westford’ ending brings this fourth installment in the series to a welcome conclusion.

Christianity/Morality – One of the major characters, Renee tries to seduce the Male protagonist Ares, even though they are both married. This is typical behavior for her character who continually engages in pre or extra-marital sexual liaisons throughout the series, including incest. Nor does she make any attempt to conceal most of these acts, but brags her sexual misdeeds in public- yet most of the  others character still seemingly regard her as a model of 'virtue' and 'respectability'.

Although the series is supposedly ‘Christian’ with a ‘Christian’ themes running throughout the books, readers may have cause to question the extent to which the characters' behavior reflects their beliefs.
They pray, and talk about trusting in God, but they are also more than willing to condone sin and immorality, and. they encourage and even promote revenge. In this novel the ‘Christian’ lead character
Ares thinks it is acceptable to murder another ruler who is oppressing his people, and considers suicide to be an acceptable course of action when he and his men are seemingly faced with imminent defeat.

The sexually promiscuous princess Renee loves to go around tormenting and abusing people for her own sadistic and perverse amusement, or to ‘punish’ them for upsetting or offending her in the slightest possible way.  All the other character normally just turn a blind eye, and let this continue unabated, or else condemn Renee’s victims as the ‘evil’ ones.
In this novel it is her husband Carmine who bears the brunt of her abuse. He has descended into alcoholism after years of it, and is seeking a divorce- which will only be given on condition that he does not drink for a month.  Yet is spite of the fact that Renee clearly cannot stand him she does not want a divorce, and we are meant to believe that this will have an adverse effect on her ,then feel sorry for her when nasty Carmine is horrid enough to thwart her efforts to prevent this outcome to the sorry saga of their ‘marriage’.

The female Christian protagonist Nicole also decides to take action against Renee’s abuses, excesses and uncontrolled spending but her actions are ultimately depicted in a negative light, as ‘unloving’ and ‘unchristian’. This is seemingly because Renee simply cannot cope with Carmine and other characters being ‘nasty’ by not letting her abuse them and have what she wants, gets tearful and depressed when they take her furniture and makeup away, and responds with her usual sensible maturity by attempting suicide.
The other characters relent however, when Renee ends up  ‘saving the day’, so that everyone realises how wonderful she is again, and repent their error of having been so utterly horrible as to tell the truth about do something to address her selfish and damaging behavior.
Indeed it is Carmine who is rebuked by Nicole, who censures him and herself for their behavior towards Renee, ignoring the fact that Renee used repeatedly tried to ply Carmine with drink to ensure that he could not get a divorce- and then seemingly  believes her lies when she claims she did not try to make him drink.

Historical- Historically speaking this ‘Medieval’ novel is very poor. The characters’ speech is totally out-of-place, riddled with modern terms, phrases and slang words, as well as numerous Americanisms. There are also a number of silly anachronisms and historical errors such as soldiers and officials give modern military salutes , under floor heating, a rather modern personal science lab, telescopes, modern cosmetics and references to ‘firing’ bows amongst others.

The technical terms and phrases and detailed descriptions of period features such as food and clothing just seem like a superficial attempt to create historical authenticity and seem to reflect the overuse of a seemingly limited knowledge of the period on the part of the author when compared to the many inaccuracies.