The Tutor's Daughter by Julie Klassen ★★★★☆ 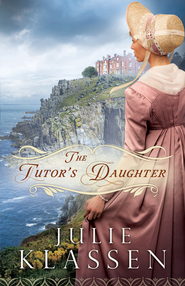 "Emma Smallwood, determined to help her widowed father regain his spirits when his academy fails, agrees to travel with him to the distant Cornwall coast, to the cliff-top manor of a baronet and his four sons. But after they arrive and begin teaching the younger boys, mysterious things begin to happen and danger mounts. Who does Emma hear playing the pianoforte, only to find the music room empty? Who sneaks into her room at night? Who rips a page from her journal, only to return it with a chilling illustration?

The baronet's older sons, Phillip and Henry, wrestle with problems--and secrets--of their own. They both remember Emma Smallwood from their days at her father's academy. She had been an awkward, studious girl. But now one of them finds himself unexpectedly drawn to her.
When the suspicious acts escalate, can the clever tutor's daughter figure out which brother to blame...and which brother to trust with her heart?"

This is the first Christian Historical Novel I have read set in this period, and the first by this author, so it was really something of a new experience for me. Overall, it was very good, and though it is a modern novel, it really seems to have the 'feel' of the classics. There definitely seem to be shades of Jane Eyre, with the mysterious nocturnal visitor, the family secret, and the forbidden wing of the house, and perhaps also even some resemblance to Pride & Prejudice, with Emma Smallwood ‘The Tutor’s Daughter’  and Henry Weston having to overcome their preconceptions about one another, to allow their blossoming love to emerge.

It did take me a while to ‘get into’ the novel, as it seemed to be a little slow and repetitive at first, with descriptions of Emma’s daily routine, and the actions built around it. It does get better about a quarter to a third of the way through, with the ‘family secret’ becoming more prominent and the characters apparently starting to come into their own. The major Characters like Emma, her father and the two Weston brothers seemed well developed and believable, enough, though others seemed a little lacking, such as the younger brothers.

I would also say that the American author has done very well in creating a believable British setting and characters, whose attitudes and values largely seem to reflect those of their time. One of my pet hates is historical novels set in Britain in which the characters are too 'Americanized', but that did not seem to be a problem here.

The Christian elements of the story seemed to be well done, and the necessity of repentance and forgiveness was conveyed. This said, the word itself is not actually used, and Emma’s conversion did not necessarily seem to be presented clearly enough.
The historical elements seemed well researched, though I am not very familiar with this period, so I would likely not be able to spot any inaccuracies very easily. I only wish I had been able to read this book on Kindle so that I could look up the definitions of unfamiliar terms more easily.
The only other complaint I really had was with some of the romantic content, which could seem annoying, distracting or inappropriate.. Emma and Henry's affirmation of their love in the storm scene seemed particularly out of place, it just did not seem the time or the place for them to be worrying about Romance, and sometimes the expressions of Romantic feelings, or some of the characters remarks and comments did not necessarily seem to fit it with what would have been seen  as appropriate according to the social conventions of the upper classes in this period.

'The Tutor's Daughter' is Due for release on January 1st in America, but we Brits have to wait until February.

Thanks to Netgalley and Bethany House for allowing me to have an electronic copy of this book. I was under no obligation to write a positive review.