Review of The Price of Freedom by Carol Umberger 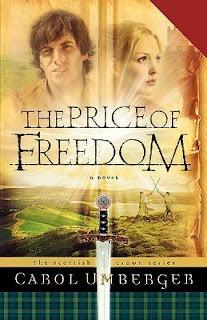 The Price of Freedom: Book 2 of the Scottish Crown Series
★☆☆☆☆

"He's a man with a mission, sworn to fight for his King and the freedom of his beloved Scotland.
She's a noblewoman with an estate to run, and household to protect, and a precious secret to guard at all costs.
Through doubt and suspicion- plus the uncertainties of war- stand in the way, they are drawn to each other. But as events move them closer and closer to the battle of their lives, they know they must each make a choice: Can she trust this scowling warrior with the welfare of all she loves best? Can he count on this strong willed women not to betray him?
When duty trumps desire, do faith and love even have a chance? And in a time of turmoil will it be he heart that pays the Price of Freedom? "

Although I am partly Scottish, and some of the characters in these novels are real or fictional members of my ancestor's clan, I was not impressed by this series or this novel. As a Romance is was passable (although the books do seem rather formulaic), though not excellent and a little cliched. One of the most annoying aspects was that the depictions of both Scottish and English characters and culture appeared to mostly be based on silly anachronistic stereotypes.
Hence, there are men in kilts galore (at a time when these likely did not even exist in the form that we know them today) bagpipes and lots of bonnie lasses and all speaking with exaggerated accents. Ach, where's' the Haggis?

Then there were the English, with accents resembling those of their counterparts in Braveheart and other Hollywood movies with seemingly little or no regional variation at all. So that the moment the characters travel a few miles over the border, everyone speaks like Queen Elizabeth II.
The simple fact that the majority of the English and much of the Scottish aristocracy would likely have spoken French as their first language in the early part of the fourteenth century when this novel is set does not even seem to come into the equation.

The English bad guy is no less ridiculously stereotypical and his character is so exaggerated and unconvincing that is hard to take him seriously even as the villain. He seemed to have no real motivation for being bad (expect being greedy and English) so had to do lots of really bad things to emphasize his badness like seducing Scottish girls, beating up a Scottish squire and repeatedly trying to kidnap the heroine.
Most of the Scottish characters seemed sickly sweet.  They are not perfect admittedly, but the Templar knight undergoing a crisis of faith, and religious doubts of the hero just appear unoriginal and contrived, and it seemed so predictable that he and the heroine would overcome their initial hostility to fall hopelessly in love by the end.

Other aspects of the historical content of this and novel fare little better.Yes the period details are there, but sometimes just seem superficial. Not to mention that at least one character seemingly had to change sides in each novel, usually in the midst of nationalistic rhetoric about 'freedom' and the 'righteousness' justice of Scotland's cause as opposed to the wickedness of the English.
Perhaps that is why historical figures such as Clan MacNab were depicted as going over to Bruce's side in this series, when they never did anything of the kind in reality.

In its treatment of historical events, there seemed to be a distinct bias. For instance in the Bannockburn battle scene Edward II King of England is depicted as having sat on his horse behind the lines for the entire duration of the battle, when in reality he was in the thick of the fighting, as a King was expected to be. He may even have been forced to leave the battlefield, but did not run away like a coward at the first hint of danger  as this novel makes out.

Throughout the novel and series, the English characters are condemned for `unchivalrous' or dishonourable conduct, which the author seemed to highlight and emphasise. Yet, towards the end of the novel the Scottish characters killed the villain in an act that would probably have been regarded as a total breach of chivalric practice and convention.
Is the unchivarous nature of this action mentioned? No, nor is any objection made against the dishonorable conduct of the Scottish characters on this or other occasions.
Such a double standard applied to history and morality strikes me as not only hypocritical, but also misleading and perhaps even dishonest. This for me was one of the most objectionable aspects of this series.