'The Tainted Coin' by Melvin Starr 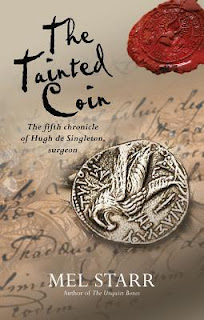 "It is the autumn of 1367. Master Hugh is enjoying the peaceful life of Bampton, when a badly beaten man is found under the porch of St. Andrew's Chapel. The dying man is a chapman -- a traveling merchant.

Before he is buried in the chapel grounds an ancient, corroded coin is found in the man's mouth. Master Hugh's quest for the chapman's assailants, and his search for the origin of the coin, makes steady progress – but there are men of wealth and power who wish to halt his search, and an old nemesis, Sir Simon Trillowe, is in league with them. But Master Hugh, and his assistant, the groom Arthur, are determined to uncover the thieves and murderers, and the source of the chapman's coin.

They do, but not before they become involved with a kidnapped maiden, a tyrannical abbot, and a suffering monk – who needs Master Hugh's surgical skills and in return provides clues which assist Hugh in solving the mystery of the tainted coin."

The Tainted Coin is the fifth and latest book in the series so far (the next due out in September). My opinion of this book was somewhat mixed.
The initial mystery was fascinating and unusual regarding a hidden horde of Roman treasure uncovered by a poor merchant. I’m a historian rather than an archaeologist, but hordes of historical treasure are something I like! The unfortunate merchant was murdered to but would not reveal the location of his hidden treasure, and as Hugh investigates the trial seems to point to his inexorable foe, Sir Simon Trillowe and a band of squires.
Trouble as usual ensues and the mystery involves a moral dilemma which threatens to cost Hugh dear.

On the positive side, there were more colourful characters, interesting medical procedures and tidbits of information which may help to challenge widely held notions about medieval people having been small and weak and The Tainted Coin was another good, clean and cozy mystery with some exploration of moral or ethical themes. It was also pleasing to see some of the characters I like return again, and come into their own like Arthur the Groom, with his beefy physical strength proving a valuable asset for Hugh, and Hugh as the family man with his little daughter.

It was enjoyable, and I will certainly want to read the next book in the series Rest Not in Peace when it comes out, but this particular installment just wasn’t one of my favourites.
The novel had a couple of weakness in common with some of the others, the main being that some elements of the story seem be getting repetitive and a little predicable. In the process of detection Hugh seems to encounter some very similar situations over and over again, and his manner of dealing with some challenges can be questionable.

Why he cannot use his authority as sheriff to prevent roguish knights from abusing people, or performing illegal acts rather than going in with his (proverbial rather than literal) guns blazing and getting hurt or into trouble in the process is an open question.
And Hugh just does seem to keep getting into scrapes so much so that the formula is perhaps getting a little bit worn and perhaps a little implausible.

Overall a good read, but not the best in the series in my opinion. It does have an unusual twist at the end, and I hope the stories will continue to develop and not become overly formulaic. The next novel does look promising so hopefully there may be some improvement.