'Swords of Heaven' by C.D Baker, A Borrowed Book 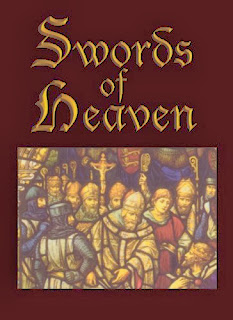 
As the rating might suggest, this was a novel which was easy to get on with, but which I sadly didn’t love quite enough. On one level I have to admit that it rather pleases me to find a book written by an American which actually gives credit to the people of Britain for the establishment and development of notions of freedom, liberty and the rule of law. Another thing in its favour is that it features William Marshall, one of the most famous knights in English history- but a figure who doesn't seems to get much attention in Christian Fiction.

Yet on the other hand it also seemed to be one of those books in which the protagonist appear rather too modern in some of their ideals, attitudes and outlook. Also there was the style, with shades of Howard Pyle.
This is good in some ways, with the novel being ‘clean’ in the true sense (not meaning the characters regularly get caught in compromising situations) but also has its drawbacks.
For one, the recounting of events is very narrative-this happened… then this happened for this reason… William did this ecetera.
Also sometimes things seemed very simplistic or ‘black and white’.

Hence William Marshall , Countess Isabel and their friends are, by and large, very very good, but the others characters varying degrees of nasty and unpleasant. Such a depiction seemed to take little account of the complexities of politics, or the relationships and motivations of those involved in events. Also some passages relating to important events seemed to be lacking drama and depth with King John often just mumbling his assent then storming out the room in a huff.

There are some very authentic touches, for instance that passages which reflect the linguistic variation of the period, with characters speaking in Welsh, Gaelic, and even smatterings of Norman French and Old English, and the author does seem to done his background reading.
However, even taking account of artistic licence, there were other details which were not so plausible.
For instance, being informed that knights and the nobility were supposed to be taught courtesy and chivalry did not seem consistent with depiction of the knights at the dinner table behaving like uncouth drunken louts with no grasp of manners at all, belching, throwing bones over their shoulders, and wiping their hands the tablecloth or dogs. I greatly doubt such behaviour would have been considered socially acceptable- rather such a depiction seemed to owe more to cliché and Hollywood than historical fact. Also the pedantic medievalist in me doubts there were actually pagan priestesses in 13th century Wales…

Then there were the generalizations, of the majority of the aristocracy as violent, avaricious, power-hungry oppressors or despots. There were certainly some very rotten eggs, but the notion that all except Isabel and William were like this seemed perhaps to reflect something of a prejudice on the part of Americans against the English upper classes which I seem to have noticed in other works.
Finally, as this work was technically Christian fiction the religious elements should perhaps be given some attention. I used to take an issue with references to praying to Mary in novels like this, but now, whilst I do not agree with or condone this practice, it is a reflection of the times.
Other than this the characters certainly had strong and active faith-albeit one which was skeptical of the church. The only think which seemed slightly odd were Isabel’s ‘feelings’ and dreams or visions. 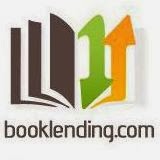 I got hold of 'Swords of Heaven' on Booklending.com, which is sort of self-explanatory. Its a site which allows users to lend and borrow Kindle Books. Once loaned, they are in your possession for 2 weeks. I think its a great idea for people like me who don't have a lot of money to spend on Kindle books, or who want to read them before buying, and there are many Christian Fiction titles available.

Unfortunately, as I am outside the US I cam borrow, but cannot lend out my own books, but anyone in  America can. So go ahead and have a look at the site, even out up some of your books. You may even have some of the titles I want to read....