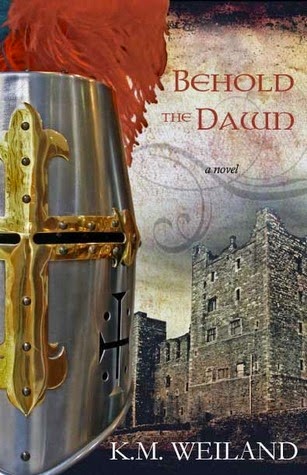 Marcus Annan, a tourneyer famed for his prowess on the battlefield, thought he could keep the secrets of his past buried forever. But when a mysterious crippled monk demands Annan help him find justice for the transgressions of sixteen years ago, Annan is forced to leave the tourneys and join the Third Crusade.

Wounded in battle and hunted by enemies on every side, he rescues an English noblewoman from an infidel prison camp and flees to Constantinople. But, try as he might, he cannot elude the past. Amidst the pain and grief of a war he doesn’t even believe in, he is forced at last to face long-hidden secrets and sins and to bare his soul to the mercy of a God he thought he had abandoned years ago.


Overall, the book left me with mixed feelings. It was undeniably well-written with vivid and evocative descriptions and realistic and exhilarating battle scenes- at least at the beginning. Towards the end the kidnappings or attempted kidnappings), attacks, narrow escapes, rescues and almost inevitable accompanying fight scenes seemed to become a little repetitive, predictable and dare I say, overdone or over reliant on action?
Also, the apparently invincibility of the hero Marcus Annan and his servant Marek seemed to stretch credibility- with the former able survive numerous wounds, to fight with broken bones or other injuries, and the latter surviving being thrown off a balcony- all of when other characters are killed with far less (Was really that easy to cut through chain mail?)
Another scene in which one of the villains broke into a castle guarded by precisely one man at the main gate seemed decidedly implausible. Seriously, I doubt a castle in the Middle of potentially hostile territory would have been so poorly defended, especially after being broken into once.

There were also a number of historical issues- the most notable being the depiction of events that took place after the capture of the city of Acre in 1191- the controversial order given by Richard the Lionheart to massacre 2700 Muslim prisoners. In the novel it is made out that Richard gave this order after only a few days when Saladin hadn’t produced the sum of money demanded as part of the negotiated terms of surrender- and he is made out to be the bad one for having broken his oath to Saladin to deliver the prisoners and acting dishonourably.

Now, during the course of reading this book I read up quite a bit on the siege of Acre, as I was curious to know what really happened.
It seems Richard made no oath to Saladin, and the impetus was on him to fulfill the terms of surrender, who acted just as duplicitous as Richard by playing for time, trying to change the terms, and draw the Crusaders into battle.
Also, over 30 days elapsed, the agreed deadline for fulfilling the terms of surrender, before the order was given. Finally, it is claimed that women and children were among those massacred, when this is not mentioned in any contemporary sources, and at least two modern historians have asserted those slain consisted entirely of fighting men. Admittedly, the origin of this inaccurate depiction was in the sources the author used, not she herself, but given the capacity of historical fiction to influence people’s perception of history, it bears mention.

I also seriously do wonder whether the leading characters would have been allowed to get away with murdering or plotting to murder, their fellow nobles, or the rape of a noblewoman, right under the king’s nose- so to speak. Medieval nobles were generally quite assertive in defence of their rights- to the point that they even rebelled against Kings who abused their power. So I certainly think the nobles would have acted to defend themselves against the villains of this story, or complained to the King
My final complaint was some of the language such as repeated use of the nineteenth century nautical slang term ‘bucko’. I think this and other phrases might have been used because they sounded ‘British’ but I’d never heard of it.

Overall Behold the Dawn was a worthwhile - and I might say somewhat compulsive read, and was certainly an engaging story with solid Christian and well-presented Christian themes of redemption and forgiveness , but d required perhaps more suspension of disbelief then I like. On the other hand I probably would read it again.