Godfrey of Bouillon, Defender of the Holy Sepulchre 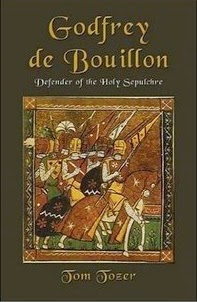 Godfrey of Bouillon is pretty much self-explanatory; it’s about the Duke of Bouillon who became the first ruler of Jerusalem following its conquest during the first Crusade. It’s essentially a fictionalised biography of Godfrey, written from the perspective of various people who knew him, from his early childhood to his death.

Admittedly, it doesn’t have the dramatic tension, political intrigue and emphasis on romance of some modern historical novels. The emphasis is more on the hero’s battles and political career, and his relations with other Crusaders. It is written in more of a narrative style, representative of older and classic novels from the Victorian period or first part of the twentieth century.

This is not to say the writing is pedestrian or partisan, indeed the depiction of peoples from other backgrounds, such as Jews and Muslims was quite sensitive and generally positive. Godfrey befriends an Imam for instance, who becomes a close friend and confidante. That said, their relationship did seem plausible for the time, rather than being based on modern liberal notions of religious syncretism or pacifism. The characters did not believe Islam and Christianity were basically the same, and everyone had equal claim to Jerusalem and war was evil, so everyone should get on.

Such notions just stick out like a proverbial sore thumb in books like this, and seem contrived, not even to mention the fundamental differences between Islam and Christianity. So Godfrey and his fellows clearly hold the traditional, Medieval Crusading mindset, of retaking the Holy places for Christendom. That said, it is claimed that Godfrey expressly ordered the Jewish and Muslim population of Jerusalem to be spared. I don’t know the truth of this, but I am aware that not all Medieval Europeans were rabid anti-Semites, and some Bishops did protect Jews. If accurate, it could cast a different light on some of the more controversial incidents in the Crusades.

Though generally researched, with a sound bibliography, I did notice one or two historical errors, such as a reference to potatoes, and to William the Conqueror having sent ships with supplies for the Crusading cause in 1098- nine years after his death. Also, Godfrey is referred to as ‘French’, when actually, as a Goodreads friend pointed out, Bouillon is located in modern-day Belgium. I could just imagine Godfrey, if alive today, annoyed at being called French for the umpteenth time, animatedly asserting ‘I am not French, I am Belgian! Like his countryman Hercule Poirot.

Finally, readers may wish to note that this is counted as ‘Christian Fiction’ as the elements of faith are strong. I am a Christian, so don’t mind this, but it did not seem preachy or forced, but an accurate representation of the norms of the period. Again, I don’t know much about Godfrey, but he is represented as very pious, though not in a sanctimonious or hypocritical way. Rather his faith seemed genuine, and the religious elements worked well with the story to explore Christian themes and concepts.

Overall, this was a satisfying read, which I would recommend for any interested in Godfrey himself or the First Crusade more generally, and seeking a work that is free of the political- correctness which can pervade other novels set in this period.