The Hawk and the Dove Trilogy- Penelope Wilcock 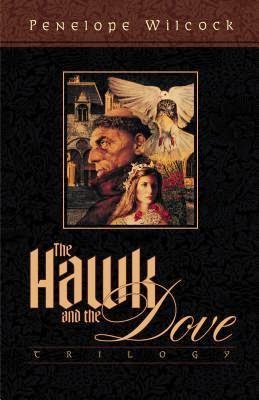 
"In a moment of decision, they will each face the truth of their own heart in God's presence

Tom must choose between the beautiful girl he loves and the call of God upon his life.

In utter despair and abandonment, Francis finds that Someone is already praying in his own dark Gethsemane. Never again will he need to hide his pain and insecurity behind a jest.

When James cannot escape the truth of who he is, waves of shame threaten to engulf him. He pours out his confession and grief to God and rises a newborn child of grace

They belonged to another century, yet their struggles are our own--finding our niche; coping with failure; living with impossible people; and changing when we realize that we are the impossible one. These humble seekers, called to live together in brotherhood, discover in the daily rhythm of their work and worship that the whole of life is a love story about a tender and passionate God. Rich with imagery and emotion, their tales depict love in action, and love given in the most trying of circumstances.

A book I have had on my Kindle for years but only recently got around to actually reading. There are other stories set in and around Medieval Monasteries, like the Cadfael series, but the device of the stories of the individual monks, told by mother to daughter centuries later holds an interesting spin.

Covering a series of themes from friendship, to pride, forgiveness, despair, learning to live with difficult personalities, the ways in God may communicate with men, and the place of sometimes marginalized groups such as children and disabled people in the church, the first two stories in this collected trilogy (The Hawk and the Dove and The Long Fall) are worthwhile and sometimes though provoking reading.
The last story The Wounds of God breaks away from the family stories device, and tells the story directly from the perspective of Abbot Peregrine (the ‘Hawk’ from the title) and his young protégé Brother Tom, detailing the events and challenges posed by the ailing Abbot’s final debilitating illness, dealing with a difficult moral issue and drawing on the author’s own experience of Nursing Care to provide a sympathetic view of growing older, and a touching conclusion to the trilogy.

On a historical level, the stories seemed generally authentic- though some of the details in the last seemed to belong more to the modern period than the 14th century (I definitely don’t think they had wheelchairs of any description) and some of the language definitely was distinctly modern.
That said, Mrs Wilcock clearly knows her Latin Liturgy, and the important details of the workings of a Benedictine Monastery. I didn’t entirely agree with the theological conclusions or spiritual beliefs of all the characters all the time, but generally it seemed sound. Also there were some occasional uses of mild bad language, including a few instances of what may be seen today as taking God's name in vain- although I'm not sure it was always meant to be taken so in the historical context.

Overall, The Hawk and the Dove Trilogy was a satisfying and enjoyable set of stories. I look forward to the sequels, written over a decade after this trilogy and continuing the stories of some of the Brothers of St Alcuin’s Monastery, to be republished later this year.