New for 2015- The Huntress of Thornbeck Forest- Melanie Dickerson 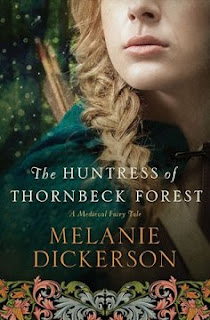 Swan Lake meets Robin Hood when the beautiful daughter of a wealthy merchant by day becomes the region's most notorious poacher by night, and falls in love with the gamekeeper.
Jorgen is the gamekeeper for the wealthy margrave, and he is in pursuit of the poacher who has been killing and stealing the margrave's game. When he meets the lovely and refined Odette at the festival and shares a connection during a dance, he has no idea that at night she is the one who has been poaching the margrave's game.

Odette is caught up in a ring of black market sellers of poached animals. She thinks the game is going to feed the poor, who are all but starving, both in the city and just outside its walls. However, most of the animals are being sold by the greedy leader of the ring-her stepfather. When Odette discovers what he is doing, she threatens to expose him, putting herself in great danger.

The gamekeeper finds her poaching one night and shoots her, wounding her. When he realizes who she is, he hides her to keep her from being executed by the margrave and also to protect her from her stepfather. Jorgen and Odette will band together to stop the black market poaching ring . . . as they fall in love. But what will the margrave do when he discovers his gamekeeper is protecting a notorious poacher?


The first in Melanie Dickerson's new series of Adult fairy-tale retellings did good homage to the Robin Hood stories. I for one think that a historical story which casts a woman in a traditionally male role can be problematic, and can end up being clichéd or contrived, or the character possessing various unpleasant characteristics, treating everyone else as stupid or inferior.

Such was not the case here. The story was perhaps a tad simplistic, and some other reviewers have called out the lack of action- but I do not think a good story needs to be action-packed, if it is well told and tightly plotted.I think I enjoyed this one for the story's sake, and that of some of characters- as as it the Romance element taking the back foot- at least in the first half, before some of the kissing at really inappropriate moments, and other Romance tropes.

The Internal monologues of some of the characters were- a little on the repetitive side and I would have liked to have seen a little more of Swan Lake, which this novel was meant to be based partly on- which is a great story. Yet the Romance was (mostly) not too mushy, and many of the characters dilemmas believeable enough - even if their responses to them seemed annoyingly double minded at times. Yet what 20 something isn't a little irresponsible at times?

My only other gripes were some language was too modern, and a few Americanisms, though the book seemed generally historically authentic and evoking the spirit of the time (aside from a couple of hiccups- a reference to Tarpaulin which I'm fairly sure they did not have in the Middle Ages for instance). That said, some of the details about the hunting didn't strike me as entirely realistic.
For instance an entire hunting party was not able to find a single deer in hours- yet Odette almost always finds one every night- and usually more than one. Also, at the very beginning it was mentioned that animals being hunted were European Red Deer.
The stags of this species can grow to huge sizes and weigh up to 500 pounds- sometimes more- so killing one would yield enough meat to feed a lot of people for quite a while- certainly a few dozen people (mostly children) for more than a day- otherwise they’d have to be eating several pounds each at a single sitting.

Overall though- The Huntress of Thornbeck Forest is a good and enjoyable story that does not demand too much from the reader, and has a sound Christian theme without being too preachy. Worth reading more than one. I personally look forward to the next one, which is about the Margrave of Thornbeck Castle- a character I rather warmed to, even though he was the potential enemy of the heroine and may have a 'Dark Side'.

I received an Ebook version of this novel free from Thomas Nelson via Booklook Bloggers for review. I was not required to write a positive and all opinions expressed are my own.