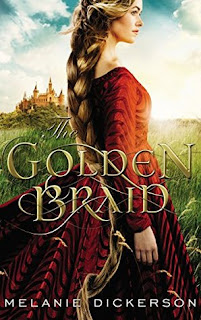 The one who needs rescuing isn’t always the one in the tower.

Rapunzel can throw a knife better than any man. She paints beautiful flowering vines on the walls of her plaster houses. She sings so sweetly she can coax even a beast to sleep. But there are two things she is afraid her mother might never allow her to do: learn to read and marry.

Fiercely devoted to Rapunzel, her mother is suspicious of every man who so much as looks at her daughter and warns her that no man can be trusted. After a young village farmer asks for Rapunzel’s hand in marriage, Mother decides to move them once again—this time, to the large city of Hagenheim.

The journey proves treacherous, and after being rescued by a knight—Sir Gerek—Rapunzel, in turn, rescues him farther down the road. As a result, Sir Gerek agrees to repay his debt to Rapunzel by teaching her to read. Could there be more to him than his arrogance and desire to marry for riches and position?

As Rapunzel acclimates to life in a new city, she uncovers a mystery that will forever change her life. In this Rapunzel story unlike any other, a world of secrets and treachery are about to be revealed after seventeen years. How will Rapunzel finally take control of her own destiny? And who will prove faithful to a lowly peasant girl with no one to turn to?

Although I have read all of Melanie Dickerson’s books, and will likely continue to do so, they have been something of a mixed bag for me. It is interesting to read an alternative representation of fairy tales from a Christian perspective, stripped of the magical and ‘fairy godmother’ type content. However, some of the content can also be a little clichéd, implausible……and romantic mush in any novel by any author is starting to wear a little bit thin for me. I really don’t want to read about characters admiring one another’s lips or physique, or having some ‘warm’ feeling when they kiss. It’s just eye-roll inducing…

Anyway, I was eagerly anticipating The Golden Braid although I had some reservations based on the synopsis (I worried it might be overly politically correct). In the first half, I was pleasantly surprised by the well-drawn characters who were obviously harbouring secrets and baggage, but also the historical details. I was rather pleased to see that the author went some way towards questioning the assumption that it was ‘heresy’ to read the Bible in one’s own language in the Medieval period. (This was not considered heretical in and of itself).

The relationship and developing friendship between Rapunzel and Sir Gerek was quite sweet and endearing- one might say rather refreshing for being free of romantic mush. He taught her to read to pay her back for helping him, and she was able to get over her distrust of men to learn about faith. Also, although she was strong and able to look after herself, Rapunzel was not one of those militant proto-feminist heroines with a chip on her shoulder against the whole world, like you see in some stories.

As the story progressed however, there was some crossover with one of the previous novels The Princess Spy, with the story covering a lot of the same ground and content. This did not continue for too long- but I felt that towards the end, after about three quarters of the way through, the story started to become somewhat rushed, choppy, and weaker than it was before.
Rapunzel gets locked in a tower (to follow the fairy tale) but it was rather a minor aspect of the story that was dealt with better elsewhere. In some ways, Mother Gothel’s control and demands on Rapunzel were more of an imprisonment. Also, there came to be some details that seemed rather- far-fetched- like Gerek just happening to pull a ‘tarp covered’ torch out of his saddlebag. Seriously? Was tarpaulin even invented then? Also, I found the idea of a war-hose being spooked by a hare a bit much- they were meant to be highly trained so as not to be easily scared. An animal like that would be pretty much useless on the battlefield, so why would an experienced knight even keep it.

Also, things got a little mushier later on in the story in terms of romance- with more kissing and touching. Although it was interesting to see the characters wrestling with one another’s revelations and feelings for one another, as well as to forgive those who wronged them.
Overall, The Golden Braid was a satisfying and interesting story which holds the attention of the reader. In spite of some weaknesses, I would say it was one of the better stories in this continuing series. Although, perhaps later novels might be better for including newer characters and storylines not related to the family and region of the others.

Thanks to Booklook Bloggers and Thomas Nelson for providing me with a free kindle edition of this book for review. I read this alongside listening to the audiobook (which I purchased of my own volition), I was not required to write a positive review and all opinions expressed are my own.