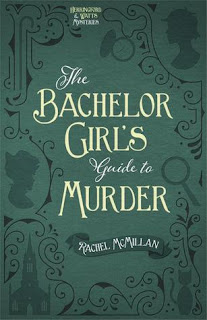 Inspired by their fascination with all things Sherlock Holmes, best friends and flatmates Merinda and Jem launch a consulting detective business. The deaths of young Irish women lead Merinda and Jem deeper into the mire of the city's underbelly, where the high hopes of those dreaming to make a new life in Canada are met with prejudice and squalor.

While searching for answers, donning disguises, and sneaking around where no proper ladies would ever go, they pair with Jasper Forth, a police constable, and Ray DeLuca, a reporter in whom Jem takes a more than professional interest. Merinda could well be Toronto's premiere consulting detective, and Jem may just find a way to put her bachelor girlhood behind her forever--if they can stay alive long enough to do so.

A good clean, light and enjoyable mystery with featuring two unconventional girls obsessed with Sherlock Holmes who decide to set up thier own detective agency.
The accompanying Novella A Singular and Whimsical Problem is an interesting introduction to the main characters- but readers should be warned that it is not a prequel as is the traditional way with such short stories. I was a little confused that Jemima (Jem) had only just met the journalist Ray de Luca at the beginning of this story, but knew him already in the novella.

Jem Watts and Melinda Herringford were endearing characters- but may come across on occasion as a little bit too feministic for some readers and for the setting (early 20th century Canada). Now don't get me wrong, I go in for women's rights with the rest of them, and yes, I can understand why they dressed as men to investigate thier cases- especially cases involving those on the fringed of society nobody else cared about.

Unconventional and eccentric ladies who don't fit in and are rather socially awkward can be interesting and almost quite endearing (as said above). Yet, I could say that Miss Herringford crossed a line thus put herself in danger of becoming rather annoyingly feministic and conceited by the end of the story.
One of those fictional super-heroines who fecklessly and stupidly puts herself in dangerous situations, and then lambasts men for helping her out of them. I personally hope she does not become 'like that'.

The mystery and process of detection (always important to the genre) were plausible and satisfactory- and I write here a seasoned mystery buff, and lover of classic mysteries. Although I might say that the culprit was a little predictable. A case of stereotyping winning over originality perhaps?

Overall, 'The Batchelor Girl's Guide to Murder' was a great debut, and it was fascinating to the discover that the quotations from women's 'Guidebooks' at the beginning were invented by the author. They seemed very real and convincing, showing a real depth of knowledge. I would certainly like to read the sequel, A Lesson in Love and Murder due out in August to see how the detecting duo will get on together.

I recieved a PDF copy of this book free from the Publisher via Netgalley for the purposes of review. I was not required to write a positive one and all opinions expressed are my own.