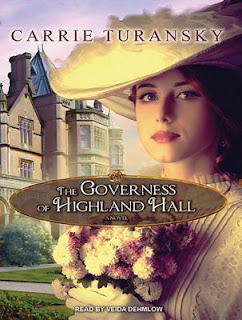 Missionary Julia Foster loves working alongside her parents, but when the family must return to England due to illness, she readily accepts the burden for her parents' financial support. Taking on a job at Highland Hall as governess, she quickly finds that teaching her four ill-mannered charges at a grand estate is more challenging than expected. Widowed and left to care for his two young children and his deceased cousin's two teenage girls, William Ramsey is consumed with saving the estate from financial ruin.

The last thing he needs is any distraction coming from the kindhearted-yet-determined governess who seems to be quietly transforming his household with her persuasive personality.Julia and William are determined to do what it takes to save their families-common ground that proves fertile for unexpected feelings. But will William choose Julia's steadfast heart and faith over the wealth and power he needs to secure Highland Hall's future?

My time for reading is somewhat limited nowadays, so I opt for Audiobooks as much as I can, to read alongside a physical or eBook.

Since I have a review copy of the third book, I thought it was the best idea to start from the beginning.

I'm sort of new to Georgian Fiction, and since I don't know the period very well, I would not really spot any errors easily. A reviewer friend remarked that this was remarkably free of errors and Americanisms that tend to mark out a lot of 'British Fiction' written by Americans, and I generally agree. I did notice one or two ('closet' instead of cupboard or wardrobe), but most were in the narration instead of the speech of the characters.
Since I have not consistently followed Downton Abbey, I cannot make any real comparison, except on a superficial level (the great house, the struggling aristocratic family etc). I felt that the setting was generally pulled off well, as well as the intention of weaving religious elements into the story, which tend to be left out of popular TV series.

That said, I did find Julia to be a little sanctimonious and overbearing at first with her attitudes, and her views of what people should and should not do. Like 'How dare he not let his sister marry a commoner if he's a good Christian- How dare he care about what society will think'?
I guess I don't appreciate stories in which those who care about their families' honour and position in society are regarded as evil enemies of God's will.

That said, there was some resolution in the end, with her realizing it was not such a great idea to impose her opinions on everyone else. Overall, she was a likeable person and a good example, and a lot of the other characters were good too.
I did like that the story was focused on family drama and relationships, instead of some implausible plotline about espionage, murder or political intrigue that are added to some stories to crank up the drama.
I was not too keen on the narrator of the audiobooks though. I think they would have been better with a British person doing them, as she did not always represent the different characters well, and struggled with different regional accents

I've now started on the second book, and I'm glad I started this series. Worth a read, but dont expect another Downton Abbey. The period and setting are the same, but this trilogy should stand out on its own, without having to ape other stories.