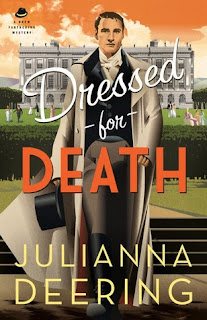 This Traditional British Cozy Mystery Gets a Regency Twist

Drew and Madeline Farthering celebrate their six-month anniversary by attending a fancy Regency era costume party. Drew is glad to see Talbot Cummins, an Oxford classmate, and his fiancée, Alice Henley, though many present seem worried about the couple. Everyone's concerns are realized when, at the concluding grand ball, Alice dies of an overdose of cocaine. Tal refuses to believe she took the stuff intentionally, and Drew is determined to find out if her death was an accident or murder.

Drew is shocked and disillusioned when the police arrest Tal's father and reveal that the man has been smuggling drugs into the country for the past twenty years. Reeling from the death of his fiancée and the revelation about his father, Tal begs Drew to find out what's going on. Drew, now questioning his own ability to see people as they really are, does so reluctantly, not ready for the secrets he's about to uncover--or the danger he'll bring down on everyone he holds dear.

I’ve had rather mixed feelings about the previous three books in this series. This one was the best so far in my opinion. I think because it allowed more time for character development, detection and it had the overall ‘feeling’ of the early 20th century cosy mystery right. The pace seemed slower, but that made it easier to follow what was going on.
The one thing I did find jarring was the number of Americanisms used by the British characters. I have to admit I was disappointed by this, as I really though this author would have been more familiar with the nuances of British English.

One of the other shortcomings was that the development and relations between the characters made some of the crimes all the more poignant and shocking, making me wonder whether all of them were entirely necessary. Otherwise the character’s motivations and responses were realistic. The religious elements I feel a little ambiguous about. At times they seemed forced and superficial, but not so at other times. Forgiveness does not come easily to the best of us, this at least did reflect life.
The solution was not easy to guess, and the Red Herrings were well used. The only complaint with the actual mystery was that I felt one aspect could have been followed a lot more quickly, as I noticed early on that there seemed to be something fishy about it.

I am interested in reading the next book in this series, due out in January, but I do wonder how long the series can really be carried out for before becoming strained and implausible.

I requested an ARC of this book from the publisher on Netgalley. I was not required to write a review, and all opinions expressed are my own.