She Walks In Power by Marylu Tyndall- Audiobook Review 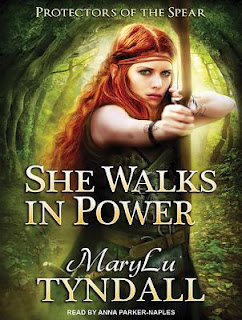 Alexia D'Clere didn't ask to be Protector of the Spear, but after her dying mother gave her the tiny metal object and made her promise to keep it safe, she had no choice.

Orphaned at age eight, she began to take over the running of her parent's castle with the help of a trusted steward. Yet, when a plot to murder her was revealed, a friar whisked her away to live hidden in the forest. There, she learned to shoot expertly with a bow and arrow and hone her skills to see into the spirit realm. Now, at eighteen, Alexia continues to keep the Spear protected.

With Alexia's powers of spiritual discernment and her skill as an archer, she is no match for those who come for the spear. That is, until she meets Ronar LePeine, one of the King's elite guard. Ronar desires nothing more than to do his duty to God and King and pay penance for past sins. Yet a forest sprite with red, flaming hair blocks his every move, all the while enchanting him like no other.

Something evil lurks at Castle Luxley, and both Ronar and Alexia are soon thrust into the middle of a spiritual battle which will not only test their very beliefs but put them both in mortal danger.

I've had some bad experiences with books by this author, having read two others and really disliked them.
Yet I gave this a chance, and purchased it with some Amazon credits, because I have a weakness for Medieval Fiction and it was said to be more of a fantasy story.
Interestingly, the woman on the cover looked oddly familiar: she's almost a doppelganger for Tauriel from The Hobbit movies- right down the slightly pointed ears.

Perhaps the comparison is apt- the heroine's ability with a bow is superhuman, and there were faint shades of the Tolkienesque.  On the whole this turned out to be a decent adventure story and an interesting spin on the old Robin Hood stories. To be honest, it had to offer something different to stand out from the others, and I confess I enjoyed this a more than I have previous books by this author.
Notwithstanding some unnecessary silliness, like the bare-chested fencing scene, which was clearly put in just so the heroine Alexia could see the hero Ronar in the buff, as well as knights wearing what I call ‘butter armour’ which could be sliced through in a single stroke. Alongside a few clichés of Medieval Fiction, like filth, squalor and dirty helpless peasants who somehow magically managed to obtain fresh milk despite having their livestock confiscated.

Now, I like Tolkien and I like Historical Fantasy, so I could have really liked this, could- but sadly didn't.

However, I believe the author made a serious error in setting a fantasy story in a real time and place.  Something had to give, and in this case, it was historical and to some extent geographical accuracy. The story was meant to be set in some vague version of Medieval England- but a version that included Pine Forests (there weren't any because our climate was not right for them) raccoons- a thoroughly American mammal, not found in the British Isles, and an inordinate number of wolves, considering they had become extinct in England by the end of the fourteenth century.
It seemed the rule of if in doubt, base the Flora and Fauna on the familiar in the United States rule applied. Yeah, OK, but Britain is not America, we have our own, different climate and plant and animal life.

On the historical side whilst some research was done, perhaps a lot much of the story fell far short. I really do wish authors would do their research on Medieval English Law, as well as Church law. At one point Alexia was accused of 'witchcraft’ and was going to be burned on the say so of a Bishop. No, only a church court could convict a person of heresy- and you could not legally be condemned as a traitor or proclaimed an outlaw without due legal procedure either.
Nor was it ever ‘treason’ to kill the Kings’ Deer.It was against the Forest Laws, which applied only to the Forest and certain animals. Not squirrels or ducks, and not the entire country.

The depiction of Medieval religious ideas fared little better. Now, I’m no Catholic, but I do believe in accuracy- and that if one is going to write anything polemical, one has to get the facts right. So, Medieval Catholics did not believe the Pope was ‘divine’ as was claimed in this novel.. Nor were they banned from reading or quoting the Bible- they had Psalters and Prayer books for goodness sake! They certainly would not have considered it ‘Blasphemy’ to talk about the Holy Spirit, or believe in the Indwelling of the Spirit. They believed certain people were indwelled by the Spirit- one being the King.

Oh, but of course, Friar Josef and Alexia, who were meant to represent true Bible Believing Christians rejected the idea that the King was God’s anointed because according to them 'we are all appointed of God'. By the end, the formerly faithful subjects come to realise like them that the 'unrighteous' King is not worthy of their loyalty and service.
See this is the problem. A lot of American authors assume that the Historical European view allowed for only two options. Loyalty to the King or following God: the two are wrongly assumed to have been mutually exclusive.
That's not how we see monarchy: its rather like telling an American they can't pledge allegiance to the flag, be loyal to their President and a Christian.

In fact it brings to mind two passages from the Bible “Every person is to be in subjection to the governing authorities. For there is no authority except from God, and those which exist are established by God”. (Romans 13:1-2) and “Submit yourselves for the Lord’s sake to every human institution, whether a King as one in authority or to governors sent by him to punish evildoers” (1 Peter 2:13).
OK, I get that this book was written by an American who is most likely anti-monarchy, but I think this content owes more to her own ideas than Holy Writ, and the  assumption that preconceived ideas of her society are 'Biblical'.

Overall, I believe She Walks in Power is a victim of the popularity of the Genre- written because Medieval Fiction is 'in' and 'cool' at the moment, but without any real familiarity for the period or the geographical setting. There is a sound Gospel message, but I would not agree with all of the other religious messages, and I think there are better ways to write a story about Spiritual Warfare. Perhaps a proper fantasy story set in an invented world would have been better.