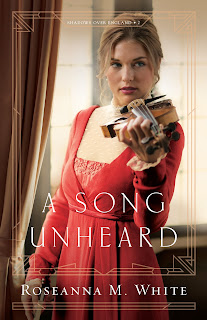 Willa Forsythe is both a violin prodigy and top-notch thief, which makes her the perfect choice for a crucial task at the outset of World War I—to steal a cypher from a famous violinist currently in Wales.

Lukas De Wilde has enjoyed the life of fame he’s won—until now, when being recognized nearly gets him killed. Everyone wants the key to his father’s work as a cryptologist. And Lukas fears that his mother and sister, who have vanished in the wake of the German invasion of Belgium, will pay the price. The only light he finds is meeting the intriguing Willa Forsythe.

But danger presses in from every side, and Willa knows what Lukas doesn’t—that she must betray him and find that cypher, or her own family will pay the price as surely as his has.

I think I enjoyed this book more than that last one. The plot was strong, suspenseful and full of intrigue in which it was never certain who was safe or trustworthy, even the seemingly ‘good’ characters. The characters were also great, well-drawn and realistically flawed. One thing that makes this series and others like it so strong, is that it breaks some of the rules of the genre: its Edwardian Fiction, but breaks away from the mould of polite aristocratic settings, focusing instead on a gang of former London street kids, thieves now working for the government. Also, the protagonists are not all nice sweet Christians.

Willa’s beliefs reflected her background: the child of a single mother who never met her father and was abandoned by her mother at the age of six. She’s tough, independent, stubborn and disinclined towards romanticism or the genteel. Her understanding of God reflected her view of her own absent father who never wanted her. Lukas was a charming rake who cared for his family and was forced to rethink his priorities to find his missing mother and sister. I could believe the characterization of Lukas’ mathematical genius sister: as people with these skills often have some form of Autism or other learning disabilities.

The story wears its historical research well, without it being overwhelming or pretentious: facts about musical scores, mathematics, secret codes, and the plight of Belgium under German occupation abound in the story, as well as some interesting details about the small Welsh city of Aberystwyth at the turn of the last century. I also appreciated the nuanced portrayal of all the sides in the War: not all Germans were presented as bad, and not all Belgians or British people as good. The spiritual themes were also worked well into the story: there were no implausible instantaneous conversions or overt preachiness. The characters’ faith showed more through their lives and the example they showed to others.

As with the last book, I was able to get so caught up in this story that I was almost able to forget it was written by an American: except for a couple of lapses. At one point the British Willa referred to the ‘sidewalk’, and a few other Americanisms. I was a little annoyed by the lack of Welsh accents in a book set in Wales, but its not an easy accent to represent on the page: and a hard language to learn. Recommended for all lovers of historical fiction.

I requested this book from a blogging/professional reading organization including Netgalley and Celebrate Lit Bloggers. I was not required to write a positive review and all opinions expressed are my own.

For the Celebrate Lit Blog Tour I'm also including a Guest Post from the author.

Roseanna M. White is a bestselling, Christy Award nominated author who has long claimed that words are the air she breathes. When not writing fiction, she’s homeschooling her two kids, editing, designing book covers, and pretending her house will clean itself. Roseanna is the author of a slew of historical novels that span several continents and thousands of years. Spies and war and mayhem always seem to find their way into her books…to offset her real life, which is blessedly ordinary. You can learn more about her and her stories at www.RoseannaMWhite.com. 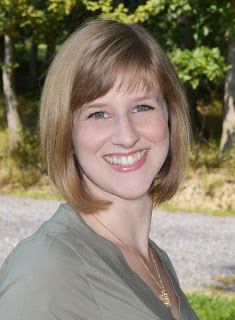 I started playing the piano when I was 7. I didn’t discover any long-dormant genius or anything, but I liked it. When my sister quit, I kept playing. In middle school, I switched teachers, and moving from the lady at my church that I knew so well to someone who was just my piano teacher made a difference in how I applied myself. It deepened my love of music.

We all know how some random moments stand out forever in our memory. One such for me happened on the school bus. I was sitting with my best friend, talking about the new piano piece I was learning. “Via Delorosa” means Road of Sorrow, and it’s a song that tells musically about Jesus’ journey to Golgotha—ending with the faint chime of the nails being driven into his palms. As my beloved Mrs. Peto went through this song with me the night before, I remember her circling a D♯ that I’d missed and saying how important that note was. That it made the whole line weep.
That it would make the hearers weep. An epiphany so huge I had to share it with my friend. A well placed sharp could make music weep! Who knew?

That was but one lesson Mrs. Peto taught me in how music could evoke things words never could. A woman of strong faith, she also taught me how a song could preach the Gospel. Music can be medicine. It can be hope. It can be tears. It can be truth. Music can be Jesus to a hurting heart that turns its back on words.
This is a lesson I never forgot, and I had it always in mind as I was writing A Song Unheard. In this story, both my hero and heroine are musicians—violinists. But Willa (who is SO STUBBORN) wouldn’t listen to words of faith from any of the people in her life “suddenly spouting such nonsense.”

But then, in her darkest hour, she hears a slip of melody. And she realizes it’s the Lord.
I pray as readers move through the story of Willa Forsythe—violin prodigy and top-notch thief—that their spirits’ ears hear more than words, more than just a story. I pray they hear the Lord whispering that ultimate song. The one that says, “I love you.”

Want to hear the song Willa eventually wrote in the book? You can! The violin music in this trailer is officially dubbed “Willa’s Song” and written specifically for this book. I hope you enjoy it! http://bit.ly/ASongUnheardTrailer


Enter the giveaway and visit some of the other Blogs involved in the tour below.

To celebrate her tour, Roseanna is giving away a Grand Prize Package of a signed copy of the book as well as a lovely album of soothing songs based on the Scriptures called Hidden in My Heart (winner’s choice of CD or digital download)!!
Click below to enter. Be sure to comment on this post before you enter to claim 9 extra entries! https://promosimple.com/ps/c72a