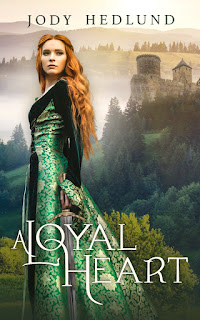 He’s taken her as his prisoner. But she’s holding his heart captive. In gaining their freedom, will they lose what matters most? When Lady Olivia’s castle is besieged, she and her sister are taken captive and held for ransom by her father’s enemy, Lord Pitt. Loyalty to family means everything to Olivia. She’ll save her sister at any cost and do whatever her father asks—even if that means obeying his order to steal a sacred relic from her captor.

As Lord Pitt’s commander, Sir Aldric is in charge of the beautiful but feisty new prisoner. He has his hands full attempting to keep Lady Olivia out of trouble. When Lord Pitt throws her in the dungeon and threatens to hang her for stealing, Aldric conceives a plot to save Olivia’s life—betrothal to him.
Can Olivia give up the prestigious match her father has arranged with a wealthy marquess in order to marry a lowly knight like Aldric? And can Aldric move beyond his past mistakes to embrace love again? When loyalties are tested, they’re thrust into danger that could cost them their love and their lives.

My Review: ⭐⭐⭐
I have to confess to some trepidation when I signed up for this book's blog tour, because I really did not get on with with first two books in the series. I turned out to be better than I thought in terms of the story.
I agree that there is a need for clean Young Adult Romances that promote virtue and traditional values such as honour, faith and chivalry. Parents seeking such a book will certainly find it here, and I would have loved reading it when I was a teenager. There is adventure, excitement aplenty, colourful yet flawed characters, and plenty of romance.

Yet it was often hard for me to suspend my disbelief, and overlook some of the inconsistencies of history and continuity.
First off, I think this novel could have done with an editor. In one place the word 'chaff' was used, where it should have been 'chafe', and 'affected' where it should have been 'effected'.
In the first scene, the heroine Olivia did not have time to put on her gauntlets (armoured gloves for the hands), then a few sentences later, it was stated she was struck 'on the gauntlet', then only seconds later, her opponent can see her bare hands, her gauntlet having magically disappeared.
In another place, Olivia drops her dagger, which is described as 'clattering to the ground': when she was standing on a riverbank. Items dropped on grass don't clatter.

Also, something which made the battle scenes unrealistic was that a number of times, characters were either threatened with, or actually wounded by being stabbed or shot through convenient gaps or slits in their armour at the neck, and other places.
Literally, why? Why on earth would any professional soldier leave the most vulnerable parts of their body uncovered and unprotected? It defeats the whole purpose of armour. Yet it kept happening. 14th century fighting men did not leave their necks or their armpits uncovered, like the characters do here. They wore specially made pieces of plate, chain maille or a padded jacket under their armour, to protect those areas.

Second, I maintained with the previous titles, and still would like to maintain that these books are essentially fantasy or fairy tales.
I say this because a number of readers have claimed they are set in late 14th century England, but almost nothing in them bears any resemblance to the history or geography of that country. Even the disclaimer at the front of the book is completely unnecessary, since no historical figures appear in it. Apart from the names of two of the castles, Ludlow and Wigmore, in a region historically known as he Welsh Marches (the castles are located in the neighbouring counties of Shropshire and Herefordshire) everything is made up.
The use of those names and the mention of 'Welsh' people is a problem though, setting it in a historical context, and creating a certain expectation of accuracy that is not really met.

Take the landscape. Its just castles, with heath land or forest in between. Characters riding for days, and not coming across any settlements or other people. Where are the towns, villages and cities? The historical Ludlow castle is situated within 30 miles of two cities, Shrewsbury to the North, and Hereford to the South, not even including the small town of the same name which it was built within the bounds of. Castles did not exist in isolation: they normally protected something, and the food needed to come from somewhere.

Some of the other historical inaccuracies are more specific. For a start, the claim made several times that prisoners of war, especially women and children were routinely mistreated and abused by their captors. Not so. In fact, historical evidence shows that in Medieval England noble prisoners were normally treated well: allowed to go hunting, and even attend court.
There were exceptions of course: King John starved two of his prisoners to death, and hanged Welsh captives, but he became known as a bad King for a reason. Which is the point really, such treatment of noble prisoners would have been plain stupid.
It reflected badly on the reputation of their captors, deprived them of the ransom which was the main reason for taking prisoners in the first place, and put them in danger of reciprocal treatment if they were ever captured.

Second, was the political system: or rather the complete and total lack of it. Nobles constantly attacking and killing each other, which was not the norm at this period, especially not in England, which was known as one of the most stable states in Europe precisely because it was normally peaceful and not riven with internal turmoil. Nobles were supposed to bound by their oaths of fealty to the King, normally made in person at the time of his coronation.
The King was supposed to keep the nobles in check and uphold law and order. The King in these books seems to be pretty useless: he's never there, and does not deal with problems until the last minute. Or just sends his lackeys to do his bidding, by attacking and destroying other noble's castles and stealing their possessions like a bunch of Vikings, centuries after the Viking Age ended.

Maybe I am over-analyzing things, and I hope I can be forgiven for that. Its just I am rather protective of my nation's history, and hate the idea of people getting the wrong idea by reading this as a work accurate history, rather than the work of invention that it is.

And its a good fictional tale, but should not be taken as serious history. That's the point, really. Even putting aside all the above, the basic details about food, clothes plants and the like is generally authentic: although the armour was outmoded for the time.

I received a copy of this book from the author and Celebrate Lit Blog Tours. I was not required to write a positive review and all opinions expressed are my own.

Jody Hedlund is the author of over twenty historicals for both adults and teens and is the winner of numerous awards including the Christy, Carol, and Christian Book Award. Jody lives in central Michigan with her husband, five busy children, and five spoiled cats.
Although Jody prefers to experience daring and dangerous adventures through her characters rather than in real life, she’s learned that a calm existence is simply not meant to be (at least in this phase of her life!).
When she’s not penning another of her page-turning stories, she loves to spend her time reading, especially when it also involves consuming coffee and chocolate.

This past year my youngest daughter turned twelve and entered seventh grade. And she decided that she wanted to read my books. Of course I was thrilled that she was taking an interest in my writing. But since my adult historical romances are more intense and contain some mature themes, I handed her the young adult series I’ve written.
As she started the first book, I peeked in her room a time or two to ask her how she liked it. “It’s the best book you’ve ever read, right?” I teased. “It’s okay,” she replied, teasing me right back. The true test for how much she liked the series came when she couldn’t put the book down.
She hid away in her room and read all day. Then she read the second book the next day and the third book the day after that. She never did gush over the series. But she didn’t need to. Her serious reading marathon told me all I needed to know! Then when I was writing the fourth book in the series, she asked me if she could read it early before it was published which was another testament to how much she enjoyed the series.

“As long as you promise to say that I’m your favorite author,” I said, teasing her again. I’m happy to say that she finished A Loyal Heart just as quickly as the others. Although I’m not sure that I’m her favorite author, I’m satisfied that she loved the series.
Even more, I’m thrilled that I could hand her sweet romances full of chivalrous qualities—like courage, sacrifice, honor, and loyalty. As she’s being entertained, she’s learning lessons about character traits that are important in relationships.
My daughter, like other young teens I’ve talked to, really enjoys medieval settings and stories. In some ways, those kinds of stories connect them to the princess fairy tales they used to love when they were little. Let’s face it, even adult readers still love stories about knights and castles and daring damsels! In a book market for teens that has grown increasingly dark, jaded, and sexual, I only wish I had more to offer my daughter and other young women. It’s my passion to continue providing wholesome, clean romances for teens, books I know will encourage and uplift as well as entertain.

How about YOU? Is there a teen reader you know who needs an alternative to what’s available in the market? I encourage you to gift them with A Loyal Heart. And make sure to enter the giveaway for a chance to win the entire series that you can read, pass along, or even gift to your library.

And now... the giveaway 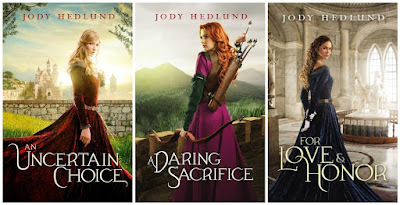 To celebrate her tour, Jody is giving away a grand prize of An Uncertain Choice, A Daring Sacrifice, For Love & Honor, and A Loyal Heart!!
Click below to enter. Be sure to comment on this post before you enter to claim 9 extra entries!
https://promosimple.com/ps/cb76