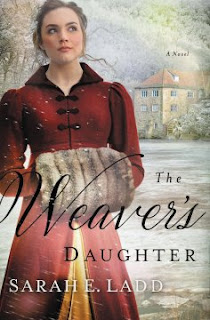 Kate’s loyalties bind her to the past. Henry’s loyalties compel him to strive for a better future.

In a landscape torn between tradition and vision, can two souls find the strength to overcome their preconceptions?

Loyalty has been at the heart of the Dearborne family for as long as Kate can remember, but a war is brewing in their small village, one that has the power to rip families asunder—including her own.

Henry Stockton, heir to the Stockton fortune, returns home from three years at war hoping to find a refuge from his haunting memories. Determined to bury the past, he embraces his grandfather’s goals to modernize his family’s wool mill, regardless of the grumblings from the local weavers.

Henry has been warned about the Dearborne family. Kate, too, has been advised to stay far away from the Stocktons, but chance meetings continue to bring her to Henry’s side, blurring the jagged lines between loyalty, justice, and truth. Kate ultimately finds herself with the powerful decision that will forever affect her village’s future. Born on opposite sides of the conflict, Henry and Kate must come together to find a way to create peace for their families, and their village, and their souls—even if it means risking their hearts in the process.

Sarah E Ladd’s first standalone novel was quite marvelous. The cover and description of ‘A Regency Romance’ might give the impression that it’s a quaint and slightly whimsical story when its anything but. In fact, parts of it reminded me of North and South by Elizabeth Gaskell- although that was set several decades later. Those who are acquainted with me may know that BBC adaptation of North and South is one of my all-time favourite historical dramas, starring one of my favourite actors.

So that’s a good start. Needless to say, the historical backdrop of the novel made for a lot of drama and intrigue. We refer to the protestors who broke up machinery and attacked mills in the second decade of the nineteenth century as Luddites. Their principal motivation was that they believed the machinery would replace them and take their jobs: and there were also concerns about exploitation of workers who operated said machinery, with small children working long hours in unhealthy conditions.

So, The Weaver’s Daughter is the story of two conflicted characters, overall, I thought it was a beautiful tale about love, duty and friendship in turbulent times with a host of very interesting minor characters who might deserve their own stories, in spite of some rather inconsistent actions and attitudes in places.

It could have been perfect, but there were two issues. One was pointed out by another reviewer, was the characters strange take on morality. Henry’s sister was pregnant outside marriage: yet most of the characters acted as though her lying about being a widow to save her reputation was more objectionable than the sin which got her into that situation in the first place.
The second issue was with certain American speech patterns and mannerisms. There were several references to characters eating with only a fork, in the modern American manner and using words like ‘gotten’ which weren’t common in Britain at the time.

Thanks to the publisher for providing me with a copy of this title via Booklook Bloggers. I was not required to write a positive review and all opinions expressed are my own. My copy has now been added to the shelf with my other Sarah Ladd books to be reread in future.