A Hero for Miss Hatherleigh by Carolyn Miller 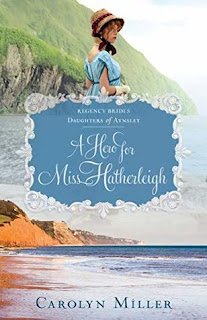 As the daughter of Viscount Aynsley, Caroline Hatherleigh knows every rule of society--and she's always followed them precisely. But when she visits south Devonshire and encounters a fossil-hunting scientist and his sister, her assumptions about what is right are shaken. Questions she has never considered about the importance of friendship and faith suddenly confront her--and her comfortable understanding about how the world works is thrown off balance. What if God wants to be the center of her life, rather than merely a social obligation?

Gideon Kirby loves science, and hunting down proof of past lives is a joy he won't willingly give up. But his scientific leanings are being challenged both by his personal beliefs and by local smugglers in the Devonshire countryside. And every day his sister's illness becomes more desperate. Adding a viscount's daughter to the mix is a complication Gideon never expected--especially since he must stay far away from this young woman he's falling for in order to protect his beloved sister's secret.

Then tragedy strikes in a smugglers' cave. And the threat of scandal may lead to broken hearts and passionless propriety. Will the shaky bond these two have nurtured be strong enough to overcome their differences--or will the trust they've withheld from each other tear three lives apart?

Another excellent beginning to a new Regency series from Carolyn Miller. As before the author delivers a memorable tale blending Romance and family drama with a flavouring of mystery and adventure.

Mrs Miller transports readers to the rugged and rough beauty of the Cornish coastline bring together Caroline Hatherleigh, the eldest of three daughters of a country Viscount with Gideon Kirby. The author often has a way of incoporating unsual or little known historical details into her stories, and in this one it really delivers.

All good Cornish tales have smugglers or wreckers, but this one also includes fossil hunters because it explored the growth of the study of prehistoric geology and life in the Regency period. I must admit a personal connection here, because I wanted to be a Paleontologist when I was younger, and so had more than a usual interest in dinosaurs.
So the references to Mary Anning, an early pioneer of fossil hunting, and the search for the remains of an Ichthyosaur - or large sea dwelling dinosaur were a real plus for me.

This novel doesn't show away from difficult themes, and I felt the spiritual content was well handled without being heavy handed as well. I also appreciated the exploration of how man of science like Gideon were able to reconcile their work with their faith.

My only complaints were the misunderstandings which kept the characters apart. They could have been resolved so easily, with just talking, and it was so obvious that declarations mads in a particular situation near the end were not sincere. Caroline should have understood that.

Thanks to Kregel books for my copy for the Blog Tour. I was not required to write a positive review and all opinions expressed are my own.