Pendragon's Heir (Parts One and Two) by Suzannah Rowntree: Two Reviews for the Price of One. 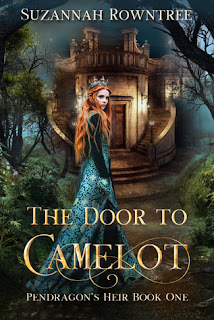 Blanche was an ordinary girl in 1900 England...until the knight crashed through her door. Now, her guardians say she’s a princess lost in time. Now, her father’s enemies want her dead.

Raised in the wild, Perceval has never known his father. Hoping for answers, he sets out to pledge his sword to the legendary King Arthur Pendragon. But dark forces threaten Camelot. And darker secrets fester behind the legend.

I've recently been honoured to act as an early reader for Australian author Suzannah Rowntree as she republishes a novel which she wrote several years ago entitled Pendragon's Heir as a Trilogy. The Third installment is due out later this month.
The Door to Camelot is an Arthurian tale which crosses over into 1900, when a young woman discovers she is, in fact, the daughter of King Arthur, who was sent from ancient Britain through a portal to save her from the enemies of Camelot and her father
It reminded me in sort parts of the recent movie The Kid who Would be King, with Giants and errant knight chasing fighting characters in the modern world with courage, heroism and a touch of fantasy and romance thrown in.

The book is also clearly immersed in the Literature of the Arthurian legends: with Tennyson and Chesterton quoted at the beginning of the chapters, as well as some older authors, such as the Tudor period writer Edmund Spenser.

Recommended for lovers of historical fiction, fairy tales and good old fashioned adventure yarns. This is the first part of the longer story retold as a trilogy- and I get the feeling its just about to get really intense.

So open the door and travel to Camelot today, to step into the richness and drama of the glorious Medieval tales retold with an interesting modern spin. Also a great taster to anyone who is not familiar at all with the legends.

Click Here to Get The Door to Camelot for only $1 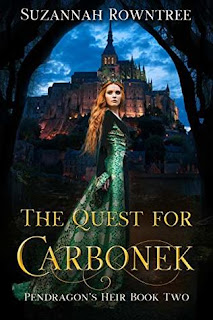 A lost princess. A daredevil knight. A quest like no other.

They say that Blanche is King Arthur’s daughter. But only Queen Guinevere knows that for sure—and she’s not telling.

To prove herself as the king’s rightful heir, Blanche must travel to the lost castle of Carbonek as the guardian of the mysterious Holy Grail. But Carbonek houses many secrets—some of which could destroy Arthur’s kingdom.

Meanwhile, young Sir Perceval returns to his fellow knights at Camelot, eager to join them in the quest for the Holy Grail—and for the damsel who guards it.

As Perceval searches for the elusive Carbonek, Blanche must battle to protect the Holy Grail from enemies who would use it to destroy the kingdom. Could the sacred relic help Arthur’s kingdom stand forever?

Or is it already too late for Camelot?

The Quest for Carbonek is the second in a three book series by Suzannah Rowntree. Its a retelling of the Arthurian Legends from the perspective of the King's daughter, Blanchefleur.

In this second installment, Blanche has returned to the mythical ancient Britain known as Logres, to discover her place and prove herself as the true heir to the Great King. Her job is to protect the Holy Grail: yes, that is as in the famous Holy Relic from all the stories and the Arthurian Legends.

This second story is full of adventure, and basically, everything that's loved in the old stories. There's knights, sword fights, chivalry, and even a dragon slaying.
And some epic quests. Basically, imagine the series Merlin without the Magic, and with all the references to Christianity kept very firmly in.
There's also spiritual allegory and quests as Blanche and the other characters must grow and develop to find their place in the world, and adjust to their new worlds. Blanche faces hardships, heartbreak and harsh testing, as well as a hint of love in her attempt to protect the Grail and prove herself in a world she was born into, but did not choose to live in.

What I live about this novel most, is that its true to the original spirit of the Arthurian Legends, which were written and composed in the firmly Christian context of Medieval Europe.
Its lyrical and poetic (each chapter begins with a short extract of a poem about Arthur or one of the associated Myths), giving the audience a taste of a bygone age in which faith was real and expressed through the Medieval belief in tangible objects such as relics and the Grail, but also through a genuine belief in grace and forgiveness. The characters fall and falter, but their intent is is to restore a corrupted world: or really, to yearn for the perfection of heaven.

So many versions of the Arthurian legends now are bland and shallow. They try to remove all references to Christianity and the mythical, or make Christians into the villains. They make warfare or romance the central focus, but in doing so create only a poor imitation of the stories: which are the basis of some of today's epic fantasy. There is a struggle between good and evil in the Quest for Carbonek: but its not some vague good and evil.

Its the genuine and diabolical greed and thirst for power of the witch Morgana, against the purity and sacrifice represented by the cup of Christ, and His followers.
My only complaint was one reference to tomatoes, which do not belong anywhere in Medieval Europe. Although since in reference was in a mythical Kingdom, which also includes dragons I think it can be overlooked.

Recommended for all lovers of Mythical Fiction, the Arthurian Legends as well as Historical Fantasy and Fiction. 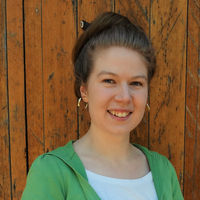 When Suzannah Rowntree isn’t travelling the world to help out friends in need, she lives in a big house in rural Australia with her awesome parents and siblings, reading academic histories of the Crusades and writing historical fantasy fiction that blends folklore and myth with historical fact.

She blogs the results at www.vintagenovels.com. Pendragon’s Heir, her debut novel, springs from her lifelong love of medieval literature.