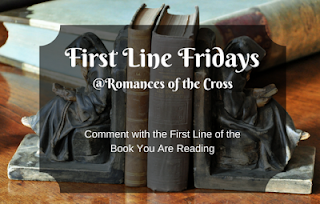 Welcome back to First Line Fridays here at Romances of the Cross.

Its been far too hot here in Britain. Yesterday London reached record heights of 38 degrees Centigrade. Which is 100 Degrees in American. Maybe all this staying in will allow for more reading time if the heat persists? I almost hope it doesn't though.

The book I'm featuring today has already been featured by several other members of this group in previous weeks, so not much introduction is necessarily. I will however include a synopsis of this wonderful book.


I love Roseanna White's writing style: descriptive and illustrative with just the right amount of detail. Not enough to bog the reader down, but enough to really create a picture. Add to this fascinating characters and some interesting historical details. I've been lapping up her books since her Ladies of the Manor series concluded 2 years ago.

Her latest novel, the Number of Love follows Margot de Wilde, a minor character from the second book in her last Shadows Over England series, which came out in the spring of 2018. 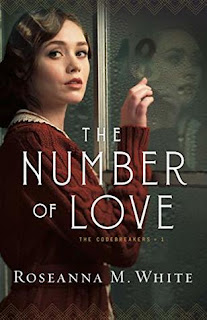 Three years into the Great War, England's greatest asset is their intelligence network--field agents risking their lives to gather information, and codebreakers able to crack every German telegram. Margot De Wilde thrives in the environment of the secretive Room 40, where she spends her days deciphering intercepted messages. But when her world is turned upside down by an unexpected loss, for the first time in her life numbers aren't enough.

Drake Elton returns wounded from the field, followed by an enemy who just won't give up. He's smitten quickly by the intelligent Margot, but how can he convince a girl who lives entirely in her mind that sometimes life's answers lie in the heart?

Amid biological warfare, encrypted letters, and a German spy who wants to destroy not just them but others they love, Margot and Drake will have to work together to save themselves from the very secrets that brought them together.

My First Line today comes from Chapter 13. I'm working my way through the Audiobook, because I only have a Netgalley version on My Kindle, I didn't download it onto my computer.

"Look Sharp Men!" One of the patients who was a day or so away from being released back to his unit scurried into the ward.

Now You Can Join In. Comment with your own First Line, or Click the Link to see what other members of the group are reading.