Like Flames in the Night by Connilyn Cossette Review 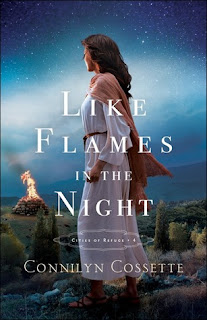 Strong-willed Tirzah wants to join her people in driving the enemy from the land of Israel and undergoes training for a secret mission inside the stronghold of Shechem. But soon after she has infiltrated the ruthless Aramean commander's kitchen, she makes a reckless decision that puts her and her allies in grave danger.

Fresh off the battlefield, Liyam returns home to discover his beloved daughter is dead. After his vow to hunt down her killer leads to months of fruitless pursuit, his last hope is in a family connection that comes with strings attached. Strings that force him to pose as a mercenary and rescue an infuriating woman who refuses to leave her mission uncompleted.

When an opportunity to pave a path to a Hebrew victory arises, can Tirzah convince Liyam to fight alongside her in the refuge city of her birth? Or will Liyam's thirst for vengeance outweigh his duty to his people, his God, and the woman he's come to love?

This series and Tessa Afshar's books have really been my introduction to Biblical Fiction. I barely read it two or three years ago, and indeed was reluctant to. I liked this entire series, which brings the period of the early settlement of Israel to life (its supposed to be set within a generation or two from the Exodus), along with the hopes and struggles of the people.

This one leaps ahead several years, and Moriyah and her family are no longer living in Kadesh, which has fallen to the Arameans. Being the nerd I am, I looked them up.

Her youngest daughter, Tirzah who has always been something of a tomboy begs to be able to join an expedition spying on their enemies in a nearby city, wading her way through the political intrigues and having to keep on the right side of a violent military leader.
There were a few scenarios and events that did not perhaps, ring entirely true, but the reader does get a sense of the danger the characters are facing to take back their land.

I would say the Romance element wasn't as strong in this one as some of the previous titles. Perhaps a little predictable, but it wasn't insta- love either, and it was good to to see the love growing between two hurting people who could bring healing to one another.
Personally, I find the audiobook narrator's pronunciation of a couple of the names interesting to say the least. Othniel to my British ears sounded very much like 'oatmeal', so I spent most of the book picturing a bowl of porridge whenever I heard his name. Silly I know.

Since I don't know much about this time period, I can't really remark on how accurate the period setting was. I will say the depictions of the various peoples were a little typecast at times (all the pagans/Arameans were evil etc), and there seemed to be a few modern turns of phrase. Not sure about mockingbirds in the ancient Middle East either.

However, overall this was a satisfying conclusion to the 'Cities of Refuge' series, which follows a family over two generations. I have not read the author's first series, and really ought to go back and do that, as some of minor characters mentioned in this series featured in that.