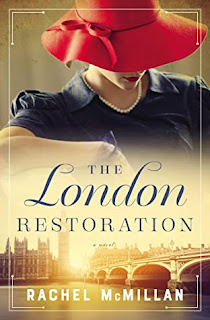 In post-World War II London, determined to save their marriage and the city they love, two people divided by World War II's secrets rebuild their lives, their love, and their world.

London, Fall 1945. Architectural historian Diana Somerville's experience as a codebreaker at Bletchley Park and her knowledge of London's churches intersect in MI6's pursuit of a Russian agent named Eternity. Diana wants nothing more than to begin again with her husband Brent after their separation during the war, but her signing of the Official Secrets Act keeps him at a distance.

Brent Somerville, professor of theology at King's College, hopes aiding his wife with her church consultations will help him better understand why she disappeared when he needed her most. But he must find a way to reconcile his traumatic experiences as a stretcher bearer on the European front with her obvious lies about her wartime activities and whereabouts.

A London Restoration is rightly described as the author's "love letter" to London. You can feel the author's love and appreciation for the city, and especially it's ancient churches and buildings throughout this novel.. What I also loved about it is that although the author *could* have fallen into the trap of writing a traditional romance, she's didn't.

The protagonists are already married, as a result of whirlwind wartime romance. Diana is an architectural historian with a passion for 17th century churches studying at King's College, where Brent teaches theology.
The 'restoration' in the title is essentially the restoration of their relationship after several years being separated by the war, and by the secrets and barriers which have risen up between them.

One gets the "feel" for London and Britain in the months following the end of of WW2 in this novel, especially the struggles of a population still having to deal with rationing and loss in a city that was still marred by bomb damage. Yet the overall tone is hopeful, not gloomy, which some humourous passages and scenes: especially Diana's lack of cooking skills.

As the two seek to reestablish their trust with the possibility that Brent may have PTSD, a potential plot comes to light in the form of a Soviet Agent. This reveals what Diana was really up to, and put all the more strain on their relationship. Will it break, or will they have to learn to trust one another and anew?

The characterization in this story was excellent, and the historical and geographical details woven in seamlessly. Of course, I appreciated the details about religious relics, and the purpose of building churches. The faith message is there, but it doesn't overwhelm the story, and its realistic. in the sense that many people did struggle to reconcile their beliefs with their wartime experiences.

Thoroughly recommended for all lovers of Historical Fiction.

Thanks to Thomas Nelson for allowing me to read a PDF of this story via Netgalley. I was not required to write a positive review and all opinions expressed are my own.