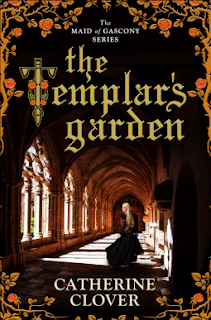 A young woman forced to fight for her beliefs. A chaplain with a secret that could determine the fate of a kingdom.

England, 1452. Under the reign of King Henry VI the country is on the brink of civil war after the Hundred Years’ War.

Young mystic Lady Isabelle d’Albret Courteault’s family is forced to flee the Duchy of English Gascony for a new and unforeseeable life in England. While they become established in the courts, Lady Isabelle discovers dark secrets about their chaplain and tutor. As their growing relationship places her in harm’s way, can she remain steadfast in her promises to uphold the monarchy and her faith?

Set amidst a period of grave uncertainty, this is the story of a woman learning to stand up for her beliefs in a patriarchal world - a beautifully crafted narrative of faith, love and grace

This isn't my usual fare. I have to say it started out more as a traditional Historical Romance, and I'm not entirely sure I cared for the conclusion. It's ending up as more of a Da Vinci Code esque thriller featuring the Knight Templar and an ancient relic.

I gave 3.5 stars mostly because I liked the historical details, and the characterization was interesting, however I deduct a star for a few things

- Unnecessary rape scene (not graphically described)
- Buying into the unproven idea that Queen Margaret of Anjou's son was the product of an affair with the Duke of Somerset - spoiler alert, he probably wasn't.
- The general anti-Lancastrian bias, coupled with a bizarre anti-Protestant bias in which everyone who favours reform of the church/adheres to the doctrines of Wycliffe is literally a murderer, rapist, or adulterer. I would similarly disapprove if all Catholics were characterized as such too, in case anyone accuses me of being partizan.

I understand there are two more titles to come in this series, and I would be interested in reading them to finish Isabel and Richard's story, especially her adventures in Italy, but take it all with a pinch of salt.

Thanks to the Publisher and Netgalley for approving of my request for this title. I was not required to write a positive review and all opinions expressed are my own

Labels: 1400s, Catherine Clover, Historical Fiction, Rating 3 and a Half Stars, Wars of the Roses