The Knight of Eldaran #2
May 2014, Kregel Publications,
Print and Ebook 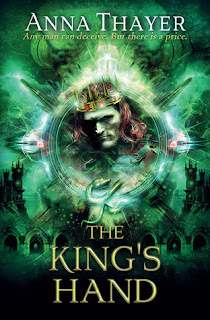 Like many from his village, young Eamon Goodhand dreamed of joining the Gauntlet, the army of the overlord Eldered. Now he is about to complete his training and swear his loyalty to Eldered and his commanders, the Hands, who uphold Eldered's tight control of the land. Entering into the service of the Gauntlet, Eamon's gifts, particularly his potent Sight, quickly become valuable to his superiors and he advances to the command rank at a speed that arouses the suspicions of fellow officers.

However, Eldered's bloody rule, and Eamon's personal friendships, start to challenge the young soldier's assumptions about what might be true, and worthy of service. And soon Eamon must conceal a fatal secret: he is sworn to both Eldered and to Hughan, the rightful king of the land. Yet he may not forswear the vows he has uttered in all good faith so however he serves, his name will be traitor.

As tensions and military skirmishes increase, Eamon finds himself trusted by both his masters. How can he possibly maintain his integrity, act justly to his fellow officers of the Gauntlet, and act on behalf of all the warring people of the land?

I bought this novel four years ago, and only got around to reading it now. It is the second in a trilogy of fantasy novels set a world that resembles Medieval or Early Modern Europe. The King, the rightful ruler of the River Realm is pitted against The Master, a malevolent individual who holds terrifying powers, and rules as a tyrant through his Hands.

Behind the Master is an even more sinister entity, The Throned who often manifests as a voice in the head of any who bear the mark, a sign of allegience to him. Controlling their thoughts and planting seeds of fear and doubt.
In this second volume, we follow Eamon still reeling from terrible mistakes he made in the first novel, and a personal betrayal. He struggles to reconcile his allegience to the King with his service to the Master as a quarter hand, or a local ruler.

I would call the Knight of Alderaan "allegorical", but I am not sure that is the correct term. Its not an allegory per se, although its very clear The King, Hughan Brennuin is the Christlike figure. The author is, by background, a Tolkien scholar, and her books are high fantasy after the order of Tolkien without trying to ape or copy him.

What is satisfying about this novel is that the protaganist actually undergoes developement in the course of the novel. He developed in the first one too, but even more here. Eamonn is truly a man torn, but makes a conccious choice to try to maintin morals in integrity in a world rife with corruption and evil. However, this isn't shown to be easy or without cost. His struggles and flaws are real.

I look forward to reading the 3rd and final novel soon.

Content warning: There is the occasional use of what I would call "British" swear words in this novel, including the word b****rd. This is used as an insult to refer to Eamon's supposedly illegitimate birth, and so I would consider it contextual, but I just mentioned it in case its an issue for some people.

I would not avoid the book on this basis, but some might wish to.