Review of Glimpses of Truth by Jack Cavanuagh

"An extraordinary intellect, the love of a beautiful woman, and a remarkable mission — life holds great promise for Thomas Torr. Chosen by the illustrious John Wycliffe to assist in translating the Latin Vulgate into English, the young peasant senses God calling him to an incredible destiny.

And danger. By order of the Roman Church, possession of an English Bible is punishable by death. Yet now, the Vatican itself seems willing to grant Thomas an audience.

His hopes high for defending Wycliffe’s translation, Thomas journeys from his home in rural England to the grandeur of Rome — and thus begins an incredible adventure, leading from the catacombs of Rome to the hinterlands of Britain. So, too, commences a baptism by fire that threatens to consume all he holds dear — his life, his reputation, and his future with the woman he loves.

More than just a novel, Glimpses of Truth is a vivid and accurate description of church history. Here are characters to fall in love with, exotic settings, drama, and intrigue . . . and an ending that will stir anew your desire to fulfill God’s call on your life." 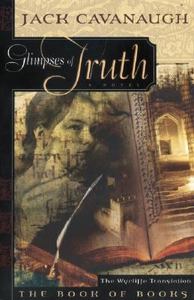 Opinion: As romance/historical novels goes this one was quite good. The subject matter was interesting and original, considering how this period and subject matter (the first English Translation of the Bible in the 14th century) do not often seem to be covered in Christian novels.

The historical details are interesting (though there are some inaccuracies and shortcomings (see the history section for more detail) most of the characters were believable. The struggles of Thomas Torr and the others in a world in which the scriptures were largely not available in their own language, and a corrupt church governed many aspects of the spiritual lives of the people provided a good backdrop to the story.


This said, the actions of the villain did not always seem to have a very plausible basis, at least not towards all of the characters. His jealousy towards the hero, and his foster father were genuine enough, but he seemed to treat the other characters badly, just because he was bad, and seemingly for not other reason than that he was an evil aristocrat, and oppressing the people was 'what they did'- apparently.

This highlights another aspect of the story which I storongly disliked, which was that the Upper classes, the aristocracy and the clergy, were almost universally depicted as wicked oppressors, cowards or apostates, who turned thier back on Wycliffe's teachings as soon as he died, because they did not want to give up their 'comfortable lives'.

By contrast, the peasants and lower classes are the 'good' and 'faithful' ones. One of the major characters in the second part of the book was an outlaw named Cayle, whose beliefs resembled those of modern Communism far too closely for comfort.
He was always harping on about the oppression of the working classes and his dream of one day 'punishing' them for their 'sin' by overthrowing them. As a result of his beliefs he distorted passages from scripture to justify rebellion and insurrection. Yet he seemed to be presented as a 'good' characters, and his ideology to Be somewhat glorified.

The emphasis on such beliefs in the latter part of novel seemed to suggest that the author had a rather Americanized view of English history, emphasizing political freedom and 'resistance' to so called 'tyranny' and 'oppression' by common people.  This made the novel appear somewhat polemical, and some of the characters beliefs and attitudes rather anachronistic. 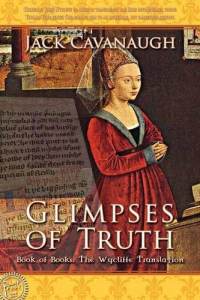 Christianity/Morality: There was no actual sexual content in this novel, but there are a few romantic scenes with much kissing between Thomas and his love interest Felice, and later Thomas' love rival Kendall.

There is also some mention of Thomas being the illegitimate son of a local Lord, and his mother having been possibly raped by the clergyman to whose church she was sent for refuge after the Lord had succumbed to temptation.

History: Contrary to what is claimed in the novel, not all aristocrats or nobles abandoned Wycliffe's ideas and teachings after his death. Nor were they lazy, pampered cowards who sat around in luxury and did nothing except oppress those beneath them. They would have had much to lose, including possibly their property  or their lives  by openly supporting those involved in insurrection and rebellion.

Also, those who took part in the peasant's revolt (such as the fictional Cayle) did not harbor the ambition of ousting the King and creating an autonomous republic, but actually claimed to be loyal to him. Furthermore, as the son of a Carpenter, the likes of Cayle might not have been unfree serfs of villeins, but free people, and even of the Middle Class.

Secondly, (this may be a spioler) one of the characters is burned at the stake for his beliefs at the behest of a local Bailiff (something like a law enforcement officer), yet in fact no followers of Wycliffe were actually burned until after 1400, more than a decade after the novel is set in the 1380s Also, heresy, for which people were burned, was a religious crime, so only the church could convict people of it. not the secular civil authorities, and certainly not a bailiff.