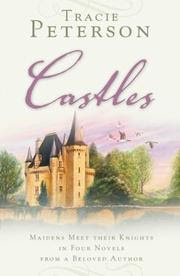 Murder ... kidnapping...revenge. The "merrie old days" of the Middle Ages leave much to be desired for four women in England and France. None of them ever believed they'd be embroiled in such plots of devastation and danger. Can God rescue them from the emotional dungeons they face--and lower the drawbridges into the hearts of the men they love? Will the men seeking to conquer their hearts be kindly captors ... or cruel conquistadors?

Meet four memorable characters created by respected author Tracie Peterson, and see if they can turn cavernous medieval castles into heavenly havens. Can God rescue four medieval women from the emotional dungeons they face--and lower the drawbridges into the hearts of the men they love?


This book actually consists of four separate novellas, of which the second is essentially a continuation and conclusion of the first. These two were my personal favourites, and I admit to a certain liking for the villain in the first, which was vindicated when he found redemption turned out to be the hero in the second.  The overarching storyline in these two seemed to be original, touching, and very well done though perhaps a tad predictable in places.

However, the plot did seem to grow weaker, and more strained (perhaps by overuse) as the stories progressed, especially into the third and fourth novellas. Also there appeared to be moments which seemed corny and decidedly clichéd or predictable in all of them.

The formula of beautiful girl in arranged marriage who realises her husband is actually amazing, or whole proverbial knight in shining armour comes to save her from peril and unhappiness did seem seem to be used in some of these stories, and it was almost inevitable that the male and female protagonists would come right in the end, not matter what happened to them.
Sometimes, the badness of the villains does seen rather overdone or exaggerated, almost like movie or comic book villains.

One reviewer on Amazon emphasised the whimsical and almost fairy-tale like nature of some of these stories, and in some ways I am inclined to agree. The pretty girls with long ringlets who are almost too perfect do seem a little clichéd or unrealistic, though they are not necessarily always entirely helpless. When I first read it, I remember being very taken with this book, but with hindsight I realise that this this criticism was in some respects, justified.
As stated before, some of the story lines were good, but the characterisation could perhaps have been better done, and some of the tales could have benefited from more research.

The representation of Christian concepts such as forgiveness and reconciliation was worked well into some of the stories, particularly the first and second, in which forgiveness and hatred appear to be major themes. The gospel and the necessity of repentance did seem to be clearly represented in the stories.

In at least one of the stories, the characters question of why a loving God would allow people to suffer proves to be an obstacle to the faith, or causes them to lose it. Such sentiments seemed to me much too modern and Medieval theologians might have had very different teachings on this subject.

There were some interesting historical details in the novels, and the setting does at time add to the story. For instance, the circumstances faced by the protagonists of the third novel, set at the time when the Black Death arrived in England, do work well with the details of the story, and could  make it more poignant.

This said, some the plotlines themselves  were to be based on misconceptions and myths about the Medieval period. For instance, the notion that human dissection was illegal- when in fact it was not.  or that women could be accused of 'witchcraft' if it was discovered that practiced medicine which again was not the case.
This may not seem to matter, but as someone who has a degree in Medieval History such things do bother me, and I personally cannot give books which include them higher ratings.


Altogether, the storylines were decent, but not always well-written or the characters and execution wholly believable and accurate. The saving grace in this case was my enjoyment of the first two novellas.