Review of Seasons in the Mist by Deborah Kinnard 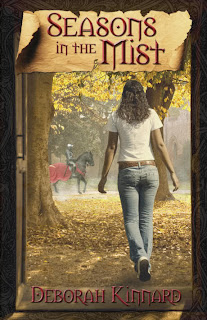 "Stranded in 1353 Cornwall, American graduate student Bethany Lindstrom knows she must find a way back to her own time or face a life of falsehoods and peril. But with the stern overlord Sir Michael Veryan, she is swept into the intrigues of King Edward's court, which will test their mettle and their faith in God to the limits -- and forever bind their lives together."

Opinion: This novel was clearly well researched and written by an author who values historical accuracy and authenticity and used plenty of period terms and phrases in the narrative. She also apparently had a good knowledge of linguistics, both of Middle English and Medieval Cornish and the peppering of the narrative with Cornish, Middle English and Medieval French phrases again gave the novel a more authentic edge. Details of political, social and economic conditions also made for a more realistic and plausible historical setting.
The Middle English-like language spoken by the characters could be something of a double edged sword- it made the novel accurate and authentic, but could also make the narrative cumbersome and heavy- going, so that sometimes it was necessary to read passages of dialogue two or more times to get the gist of what the characters are saying. Thankfully, the author provides a glossary at the back, and the Kindle dictionary makes life easier, but this could be a little off-putting for some readers.

The romantic aspects of the story were also generally well done and there is no sexual content, which many `romance' novels feel the need to resort to. Though some of the romantic scenes seemed a little overstretched and overdone at times, and this really did not always seem necessary as Beth and Michael the hero's depth of feeling was pretty obvious for the most part anyway, so did the audience really need to have it affirmed so many times to get the picture?

The characters were generally well developed and believable, allowing the reader identify with or feel for most of them. The time travel concept is also well handled, Beth's sense of confusion and isolation at landing suddenly and unexpectedly in the 14th century was very relate-able and quite understandable for her circumstances- as were the responses of the Medieval people to her strangeness.

Christianity/Morality:  To 'get by' in the past Bethany tells a lot of lies and falsehoods, primarily for the reason that she thinks nobody will believe her claims to be from the future, and so invent a sort of 'cover story' for her turning up alone and hurt in the 14th century. She does agonise over the morality of such a course of action, and eventually reveals the truth to the hero Michael, but not to anyone else.

I had some issues with the treatment of some biblical and Christian concepts in the book. For instance, in one place Bethany says that Michael's evil half-brother who was killed by him in single combat's `soul dwells with our dear Lord' , despite having lamented the fact that he had not been shriven or made his peace with God a few sentences before. So it is seems to have clearly been implied that the person is question went straight to heaven without having confessed, repented or been forgiven of his sins.
Bethany also 'says Aves' or prays to Mary a few times throughout the novel.

Sheila, Bethany's modern day Cornish host is a strange and unconventional personality to say the least. Her main role is as Bethany's `guide' and `mentor' which is all well and good, but the constant references to her `seeings' or ability to anticipate future events, and `intuition' by which she knows intimate details about Bethany are really just- weird. Sheila is supposed to be a Christian and the author tries to attribute her abilities to God, but I simply could not buy this. It would be all too easy for readers to see Sheila as a `psychic' of some description, and come to the conclusion that psychic power supposedly comes from God, or is compatible with Christianity- a dubious and perhaps even dangerous implication for a Christian book.

History: One thing that I found incredibly annoying being a Medievalist Historian myself was Beth the Historian heroine's belief that she could be branded a `witch' and summarily burned at the stake by the people around her for the slightest and most trivial things, such as wearing `strange' clothes, or having surgical scars. As a Doctorate level `expert' on 14th century English history she should have realised that the above would quite possible neither have been legal or very likely, as burning at the stake was not particularly common in England at this time and often reserved as a last resort for only the most serious of offences, such as heresy and supposed Satanism (to my knowledge.)

On a personal level I disliked the way that some Historians and the members of the historical profession seemed to have been depicted in the story. It appeared to be claimed that all they were interested in was 'dry facts' for their own sake, or for their own self-aggrandisement, yet many Historians wish to learn about the day to day lives of the people they study- contrary to what Beth thought.

Beth also seemed to adopt a rather condescending view of `medieval medicine' for most of the book, dismissing it as rubbish that could not heal anyone and marvelling at how soldiers could have survived the wounds which gave them the scars they bore without the wonders of modern medicine. Apparently she expert was unaware of the ability of at least some surgeons to deal with wounds relatively effectively (to my knowledge) . So for a supposed trained Medievalist, Bethany's knowledge of many aspects of Medieval history was decidedly lacking.