Review of 'The Fairest Beauty' by Melanie Dickerson

The Fairest Beauty by Melanie Dickerson ★★★☆☆ 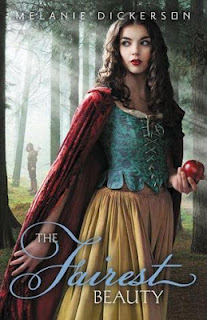 "A daring rescue. A difficult choice. Sophie desperately wants to get away from her stepmother's jealousy, and believes escape is her only chance to be happy. Then a young man named Gabe arrives from Hagenheim Castle, claiming she is betrothed to his older brother, and everything twists upside down. This could be Sophie's one chance at freedom---but can she trust another person to keep her safe?

Gabe defied his parents Rose and Wilhelm by going to find Sophie, and now he believes they had a right to worry: the girl's inner and outer beauty has enchanted him. Though romance is impossible---she is his brother's future wife, and Gabe himself is betrothed to someone else---he promises himself he will see the mission through, no matter what. When the pair flee to the Cottage of the Seven, they find help---but also find their feelings for each other have grown. Now both must not only protect each other from the dangers around them---they must also protect their hearts."

Opinion: `The Fairest Beauty `was a good and original retelling of the Snow White stories, which stood out from the crowd of some of the recent dramatic adaptations of recent times. Melanie Dickerson seems to have a knack for cleverly transferring fairy tales into a real historical background, in this case Germany in the early 1400s, and whilst removing the more fantastical elements (magic, fairy godmothers) retaining the basic elements of stories as well as their charm.
The Christian themes in this novel seemed to be well presented, especially that of forgiveness and reconciliation which could be seen to fit the story well.

There are some interesting and well-drawn characters, Gabehart the hero being my favourite. He seemed to be something of a lovable rogue at first. Impetuous and determined to prove himself, perhaps even with a slightly rebellious streak which caused him to defy his family to go and save Sophie, he nevertheless seemed rather an endearing character.
Then there was of course Sophie (Snow White). Sophie's life is endangered by the Duchess Ermengard's murderously egotistical rage, and has to be rescued by Gabe, but she is not shrinking violet and seems sufficiently spunky and independent to please most people.
This said, she was not my favourite character, although she had her moments, she seemed a little too passive sometimes. She and Gabe's developing love, whilst also sweet did seem a little predictable in its culmination, with the possibility of Sophie marrying Gabe's brother to whom she was betrothed seeming very unlikely. Of course she would fall for the dashing hero who saved her.

Not to forget Duchess Ermangard herself- the archetypal fairy-tale baddie of the Wicked Stepmother. She was indeed an egotistical megalomaniac, as could be expected, yet I found her to be rather a disappointment. Rather like Tilda Swinton's White Witch in `The Lion, The Witch and the Wardrobe' movie, she just did not seem to very threatening or menacing, as much as she was meant to be so.
As another reviewee pointed out she seemed to 'lack motivation' her her cruelty. If Sophie herself and almost everyone else believed her to be a servant, and the Duke's daughter that she really was to be dead how could she be that much of a treat to the Duchess? It would be much more plausible if, as in the original story, Sophie and everyone else knew exactly who she was.
Finally, `The Seven' who were not seven dwarves, (though one match the description) but seven men with what we would now call learning and physical disabilities. Each was unique, but not all seemed to be developed, though that may have been because some played a more prominent role, whilst others seemed to be very much minor characters.

Moving onto the story itself. It is sweet and charming, and in some places engaging, yet it somehow reminds me of a children's drama or movie that could be corny and unrealistic in places. For instance, it was supposed to be almost impossible to escape from Hohendorf Castle, the Duchesses' dominion, and the characters state that few have ever done so.
Yet no fewer than three characters are literally able to walk (or ride) out in a short space of time.
Sophie and Gabe's pursuit by the Duchess soldiers through a forest provided some excitement, but also would not be out of place in a movie. Though unlike in some of these, not all the arrows loosed by the bad guys miss, and Gabe does get wounded.
The novel also seemed to lag a little towards the middle and the end, though this was the part in which Gabe and Sophie love developed.

Overall, the Fairest Beauty is a worthwhile read, and I think would certainly appeal to teenage girls, but also in some ways to adults too, though maybe not universally.
It was original, imaginative and enjoyable enough, though I felt rather corny, predictable and implausible in places.
As with a previous novel read by the author , I also felt that the writing style of this one seemed a little too simplistic with a few too many coincidences or easy resolutions. This said, as an adult reading a novel aimed at children, it is possible my expectations were too high, and the writing style was intended to appeal to a younger audience.
Christianity/Morality: Aside from some characters referring to the Duchess Ermengard dabbling in Black Magic, and Sophie and Gabe's relationship blossoming when she was still betrothed to Gabe's brother, there was little objectionable in the book.
This said, Sophie and Gabe did kiss and embrace, though nothing that was actually immoral actually conspired between them when the betrothal still stood- although by the standards of the time such behavior might well have been regarded as such.

History: Some other terms the character's used also seemed a little too modern. In one passage Sophie thought that the Seven playing their instruments looked like a 'band'- exactly how would a fifteenth century person know what a boyband looked like when no such thing existed? There was also talk of Gabe having 'taken' an arrow, as one would 'take' a bullet today. Bows were not the same as guns, and I am not sure Medieval people would have spoken in such terms
Towards the end of the novel Gabe turned down the offer of getting his own land, and even the title of a Duke because he was more interested in pursuing a career as a Master Stonemason. It seemed very implausible that the son of a nobleman would done such a thing  in order to take up a profession  which would likely have been seen as 'beneath' them.
I received an advance copy of this book free from the Publisher in return for a review. I was not required to write a positive one.