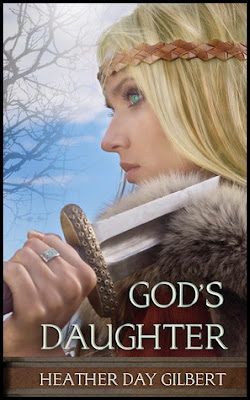 Heather Day Gilbert very kindly sent me an advance reader’s copy of her book in exchange for a review- and I was glad to have it. Books set in the Medieval Era are by far my favourite, though the Vikings aren’t my favourite people (as a staunch supported of King Alfred who fought them in England).
God’s Daughter covered some interesting subject matter (and period) that doesn’t seem to receive much attention in Christian Fiction - the Viking settlement of North America circa the year 1000. As a Medievalist I consider it a rich and fascinating era, with many stories that deserve to be told.

Personally I for one had never heard of Gudrid or her story, so it was interesting and original. The setting seems to present to be generally realistic and well researched representation of the Icelandic Vikings, their culture and world.
The historical complaints  were few. One was the that the characters’ language sometimes semed rather too modern with terms like ‘smart’  and I’m not sure if Vikings at the turn of the 11th century would have referred to America as ‘The New World’.
Gudrid’s position on slavery and some of her views on other subjects did not seem to be entirely ‘of her time’. That and one of the main male characters walking around in tight leather pants- more like a modern Biker, or extra from an 80s TV dramas than an 11th century Viking.

I sometimes found it a little hard to keep track of all the characters, and sometimes keep up with the story. The book was written in the first person, from Gudrid’s viewpoint, which did seem to go ‘off track’ at times, reminiscing or musing upon some other incident on subject in the middle of a narrative about something else. Then again, most humans seem to do that upon occasion, so perhaps it things more credible.

The Christian aspects were fairly prominent, given that Gudrid was a convert to Christianity, having once been a Pagan Priestess. Her understanding and grasp of some Christian teaching and precepts was somewhat limited, and some of her ideas and actions questionable at times (though she seemed to have the basics right), such as considering it acceptable to take part in some pagan rituals, or just taking for granted that professing Christians who had engaged in sexual immorality could go to heaven.
Perhaps this was unsurprising given the historical context. She did not after all have the access to the Bible in her own language, did not know much Latin, and had little ‘moral support’ in the words of the author. I must practice what I preach and not judge the past by modern standards as well!

Unlike most books in the genre; God’s Daughter was not a romance. Gudrid was already married, though she did struggle with her feelings for other men. On several occasions she would end up ‘bumping into’ one of the two main protagonists who fancied her (which became rather predictable) when she went off on her own, or she would go to meet them on her own for some business or other, which would lead to kissing (or almost kissing).
This was perhaps one of the most infuriating and potentially objectionable aspects of the story.

I’m have serious doubts that such behavior would have been acceptable in that particular society or time period- especially for the wife of a chief. I know the best of us faces temptation, but wasn’t always entirely comfortable with Gudrid’s attitude towards her husband, other men or indeed her behavior which verged to the downright wanton once or twice-though she was never actually unfaithful, and there is resolution at the end.

Overall, God’s Daughter is a good debut, I personally might have like liked a little less kissing, and Vikings who seemed a less- American. People who are ‘into’ the Vikings will probably like it, and I think it would appeal to fans of historical and Medieval fiction more generally, and who are seeking something different from the usual diet of Regencies and stories set in 18-20th century America served up in the Christian Fiction genre.
I would be interested in reading more by this author, and especially the next in the series Forest Child.
___________________

Author Biography from Smashwords.com: "Heather writes character-driven novels that go beyond the vows, capturing the triumphs and heartaches unique to married couples. A graduate of Bob Jones University, she's been married to her sweet Yankee husband for over sixteen years. After ten years of homeschooling and six years of writing, she really doesn't have many hobbies. Born and raised in the West Virginia mountains, she believes that bittersweet, generational stories are in her blood."