I Serve: A Novel of the Black Prince Rosanne E Lortz 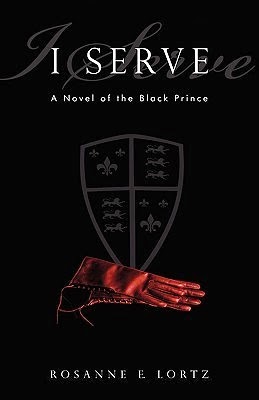 A Tale of Arms, of Death, of Love, and of Honor.

Set against the turbulent backdrop of the Hundred Years' War, I Serve chronicles the story of Sir John Potenhale. A young Englishman of lowly birth, Potenhale wins his way to knighthood on the fields of France. He enters the service of Edward, the Black Prince of Wales, and immerses himself in a stormy world of war, politics, and romantic intrigue.

While campaigning in France, Potenhale develops an interest in Margery, a spirited lady-in-waiting with a close-kept secret. He soon learns that Sir Thomas Holland, a crass and calculating baron, holds the key to unlock Margery's mystery and possesses the power to overturn all of his hopes.

When the Black Death strikes Europe, however, Potenhale realizes that the fiercest enemy does not always appear in human form. Seeing the pestilence as a punishment for the sins of his generation, he questions his calling as a knight and considers entering the cloister. Margery or the monastery? Torn between losing his soul and losing the love of his life, he finds friendship with a French knight who might--just possibly--help him save both.


Personally, I found it quite a welcome change to discover a book written by an American set during the Hundred Year War which was not anti-English. I Serve was such book, it was critical of my country folk at times and sometimes perhaps a little uncritical of the French, but generally presented a balanced and detailed representation of the period. Replete with realistic battle scenes, romance, and the life experiences of a young man at arms the service of his lord.

The style appeared to be emulating the works of Victorian authors such as Howard Pyle, with more pseudo-archaic language towards the end of the book, and a rather narrative style of recounting the major events. This may not be according to everyone’s taste but as the work covered and long and complex period, it was in some way necessary.

Many Americans know about Joan of Arc, but perhaps not so many are familiar with England’s great King Edward III, and his famous son Edward, the Black Prince of Wales. Rosanne Lortz book brings these figures and their compatriots to life with a host of colourful characters in a world of knights, tournaments, chivalry, villains and warfare. A world of changing certainties in which the Protagonist, Sit John Potenhale (who was a real person) questions the morality and honour of knighthood, and the worth of high position in the wake of the Black Death.

The bibliography in the back of the novel attest to the level of research and author's belief in the importance of reading primary sources. So the book is largely accurate- though I did notice one or two errors-like the reference to something looking like stripes of a skunk, a species indigenous to the Americas which the average 14th century Englishman would have had no idea about the appearance of.
The characters seemed to be very much ‘of their time’ which is, in my view a good thing, but could raise issues for others. Namely, they do believe in revering Relics and praying to Mary. This used to be a real issue for me, however I now accept that is a reflection of the time, without condoning it.

With skilful use of contemporary ideas, introduced by one Geoffroi de Charny, and French knight who wrote a book on knighthood the rights and wrongs of the vocation are explored, and the possibility of just war being compatible with Christian ideals. Did being a knight mean a man could not be saved, as Potenhale feared? The solution raised is both touching and relevant, and since I have read the book in question, something I could perhaps identify with more readily.

There did seem to be a tinge of scepticism, perhaps even bordering on ridicule of those who believed the plague to be the judgement of God, as most were presented as being ill and losing their minds. In fact, many people in England believed the Black Death to a judgement, not just a few isolated fanatics or those driven mad by their affliction as seemed to be portrayed. Technically, there is no gospel message, as we would recognize it, but there is some emphasis on Christian themes, the aforementioned being the only aspect which really bothered me.

Overall, I Serve is recommended, although those who are not used the writing style may have some issues.