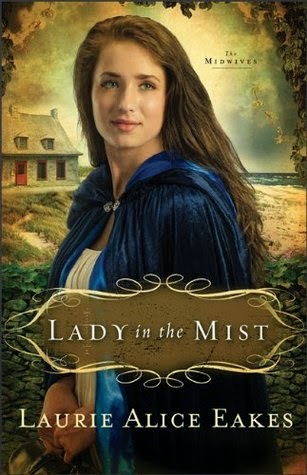 My second read by Laurie Alice Eakes and the first title in her trilogy The Midwives has romance, intrigue, mystery and a cast of colourful characters. The writing style and short chapters make it an easy read, and which I found quite compelling once I began to get into the story.
In some places story did drag and could be repetitive, perhaps it was a result of inexperience being the author’s first full length novel, but it could have been wrapped up sooner and been shorter.
Also, I think that some of Tabbie and especially Dominick's behavour would have been considered inappropriate and flirtatious in the extreme for an unmarried or not formally courting couple of the time, yet they seemed to sometimes wonder why people objected.

The War of 1812 and its preliminaries is a subject that receives a fair amount of attention in Christian Historical fiction- especially since the 2011 release of this novel was approaching the bicentenary. The author provided an original ‘spin’ on the subject matter in some ways, with a heroine whose work and connections bought her close the action, and perhaps something of the ‘other side’ with the British hero Dominick, as well as questioning the view that impressment was the official policy of the country he represented.

That said, a major complaint I have with not only this story but those set in this period in general is how they make out impressment alone caused the war- or the threat of war in this book. No mention made of the invasion of Canada or the policies and activities ‘war hawks’ in the American government. If anyone wanted war it may have been them, not the British. I don’t know whether Americans are simply taught that the 1812 war was all the fault of the British but to find that even Christian Fiction does not seem to tell the whole story strikes me as sad.
One pitfall of novels like this in my opinion is that they tend to represent the stereotype of what some Americans think British people and society are like, not necessarily the reality. Not all Brits are snobbish aristocrats, nor wealthy.The common mistake of using the terms ‘English’ and ‘British’  interchangeably and synonymously is also made-sometimes even within the same paragraph. England and Britain are not the same country as the latter includes Wales and Scotland- though not apparently in the minds of most of the characters including Dominick who ought to have known the difference. So the British navy was not comprised entirely of Englishmen.

Historical and cultural concerns aside Tabitha’s religious doubts seemed plausible enough considering how many people she lost, and her ‘faith journey’ was not easy. Her former fiancé and other characters struggling for redemption and freedom seemed credible.
His wanting real faith instead of hypocrisy or expediency was an idea which appeared relevant to real life, but perhaps the specifics of his background were not entirely plausible even for the time. There was a valuable message about not trying to make God fit into our plans, my only gripe was that sometimes that characters discussions of faith seemed like platitudes, or difficult circumstances descending into preachiness.

Altogether, Lady in the Mist was a well-written story with some great descriptive passages by an author who has clearly immersed herself in the setting, worth reading again but not a five-star read for me.
I received a copy free from the publisher in exchange for an honest review, I was not required to write a positive one.