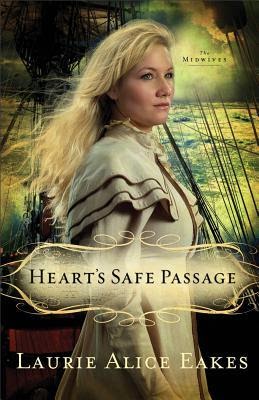 "It's 1813 and all Phoebe Lee wants out of life is to practice midwifery in Loudon County, Virginia. When Belinda, her pregnant sister-in-law, presses Phoebe to accompany her onto a British privateer in order to cross the Atlantic and save her husband from an English prison, Phoebe tries to refuse, then finds herself kidnapped.

Captain Rafe Docherty is a man in search of revenge. His ship is no place for women, but he needs Belinda in order to obtain information about the man who destroyed his family and his life. Between Belinda's whining and Phoebe's hostility, Rafe can't help but wonder if he made the right choice.
When it becomes apparent there is an enemy among them on the ship, the stakes are raised. Will they reach the English shore in time? Can love and forgiveness overcome vengeance?

Book 2 in The Midwives series, Heart's Safe Passage is a stirring tale of love, intrigue, and adventure on the high seas. Readers will feel the salt spray and the rolling waves as they journey with Laurie Alice Eakes's vivid characters on the treacherous path toward redemption"

Heart’s Safe Passage started well and was an interesting angle on the nautical or privateer setting chosen by other Christian authors. As the story developed, there seemed to be an over-reliance on dramatic events to keep the reader’s interest. This was also the case with the sequel, and whilst a certain amount of drama makes for a good story, so many dramatic and tragic events in such a short time and small ship stretches credibility a little, which seemed to be the case here.

As with the other two books in the trilogy, the Christian theme of forgiveness and having genuine righteousness, rather than preaching at others whilst nursing hatred in one’s own heart was woven well into the story, and honestly portrayed. That said, the characterisation suffered for the cliché used so many Christian fiction novels- the handsome protagonist who has lost his faith because something terrible happened to him, and love of the godly woman that helps bring him back. A little too much on-deck public kissing and touching for a supposedly respectable and well-born lady with a man she was not married to for my liking too.

Also, whilst the details of the setting seemed well researched (most of the terms for the parts of a ship were lost on me) other parts were not so accurate or well researched. There did seem to be some stereotyping of the main Scots characters, for instance, complete with red hair and the obligatory dialectal phrases like ‘bairn’, though I don’t know of many Scots who say ‘ken’ instead of ‘know’- at least not those from Edinburgh. Also, whilst it could be understandable for American characters to confuse England and Britain, or not distinguish between the two, even Rafe and his Scottish crew used the two terms synonymously, when they ought to have known better.

Altogether, this was a good book to read once, but not a favourite I would keep to read over and over again. 3.5 stars. Nothing against the author personally, but I think I am going off some of these ‘fluffy’ romance novels, which all seem to have good looking characters, predictable endings and similar plot lines, and this one didn't have a lot to make it stand out from the crowd.
I received a copy of this book free from the publisher for a review, all opinions expressed herein are my own.