New for 2015- The Baron of Godsmere- Tamara Leigh 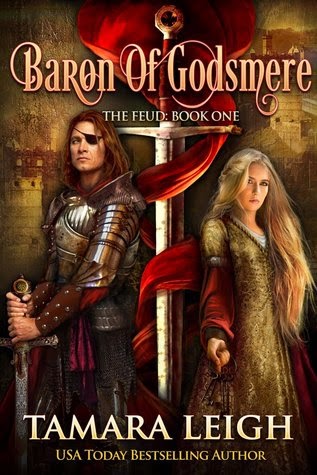 THE FEUD
England, 1308. Three noblemen secretly gather to ally against their treacherous lord. But though each is elevated to a baron in his own right and given a portion of his lord’s lands, jealousy and reprisals lead to a twenty-five year feud, pitting family against family, passing father to son.


THE DECREE
England, 1333. The chink in Baron Boursier’s armor is his fondness for a lovely face. When it costs him half his sight and brands him as one who abuses women, he vows to never again be “blinded” by beauty. Thus, given the choice between forfeiting his lands and wedding one of his enemies to end their feud, he chooses as his betrothed the lady said to be plain of face, rejecting the lady rumored to be most fair.


THE ENEMY
On the eve of the deadline to honor the king’s decree of marriage, the fair Elianor of Emberly takes matters into her own hands. Determined none will suffer marriage to the man better known as The Boursier, she sets in motion her plan to imprison him long enough to ensure his barony is forfeited. But when all goes awry and her wrathful enemy compels her to wed him to save his lands, she discovers he is either much changed or much maligned. And the real enemy is one who lurks in their midst. One bent on keeping the feud burning.


NOTE: BARON OF GODSMERE is a romance wrapped in an inspirational message true to the time period often referred to as “The Age of Faith.” Due to an integral part of the plot—that of a woman whose past causes her to fear even a husband’s intimacy—it is not tied up with a bow too sweetly pretty to untie. Hence, due to the hero’s efforts to court his lady, this romance is more a “Clean Read” than an “Inspirational Read.”


This novel was- in a sense, fairly typical of the Genre in terms of the central love story between protagonists who initially cannot stand each other. The plotline of the feuding between three noble families was interesting and original, but overall I was disappointed, as the story could have been so much better.

My main issue was that I considered a lot of the major details to be implausible and historically inaccurate. I have said many times before (and may say many times the future) that forced marriage was illegal under church law from about the 1100s onwards, yet it is a central feature of so many Medieval Romances.
This book was no exception. In the scene when the marriage ceremony takes place and the priest asks Elianor if she willingly makes her vows.

Bayard responds for her by saying ‘She has no choice’. No! That would be like announcing in the public square that your marriage was invalid and illegal- the church clearly taught and enforced the rule that both parties had to give their free consent for a marriage to be considered valid. Considering that the validity of the marriage was so important to the story, this just seemed totally illogical.
If you wanted to make sure it was valid and above board- why the goodness would you give people reasonable cause for declaring it illegal by very foolishly not allowing the bride to say the very thing that rendered it so?

I also didn’t agree with the vilification of King Edward III for using the noble families as ‘pawns’ by forcing them to marry- at one point the characters even equated him with the murdering villain for doing so. Seriously? Arranging marriages to put an end to a feud as tantamount to murder?
Medieval Kings had to keep the nobility in check, those who did not usually came to a very bad end.  Such an attutude suggested a very modern, individualistic outlook on the part of the characters.

Furthermore, the King could not technically force anyone to marry- he could encourage them, even pressurize them into marrying the person he wanted, but he could not make them if they were against it. To do so would be openly defying the church, and few Kings would have dared to do such a thing.
Also, the simple fact is that there exists evidence of noblewomen who did refuse to marry the person the King wanted, and subsequently chose thier own partners.

Their circumstances also seemed a little- extreme- I notice that many of the female protagonists in Mrs Leigh’s medieval stories seem to be the victim of some kind of abuse- whether at the hands of a spouse or relative. I understand that there must be drama, and tension in the background of the characters to make things more interesting, but does it have to be made out that rape and domestic violence were simply normal and acceptable at this time and there was nothing any woman could do?

There was some good characterisation, the story did seem to improve about halfway through from the characters initial preoccupation with avoiding or having sex (though this still persisted to some degree). Yet t I am almost incline to think this would have been better as fantasy- i.e. not set in a real country or time period but an invented one, rather than historical fiction.
It was readable and enjoyable some level, and I found myself flitting over the non-graphic bedroom scenes. It should be stated that nothing was described in detail- but the characters just seemed to preoccupied with sex – with it consuming much of their time, thought and conversation in some parts of the book- and I really did not want to read about it.

Too many clichés and inaccuracies, a little hard to follow at times, and the changes of heart with some of the characters seemed too quick and easy. It seemed like one moment Bayard’s ex hates him, and the next she is asking for forgiveness- yet it did not seem genuine- more self-serving. Another reviewer has said that the books in the Age of Faith series by the same author seemed too melodramatic, and I am inclined to agree in this case.
Far too much ill-circumstance thrown at the characters before they could get their happy ending. What's wrong with a little more of the ordinary difficulties and challeges posed by everyday life?

There was a meaningful Christian theme about forgiveness and overcoming bitterness and mistrust, but, this story was really not my cup of tea, and I fear the message did not redeem to shortcomings of the story entirely.

I loaned a copy of this book for free and by personal request. I was not given a copy and was not required to write a review.