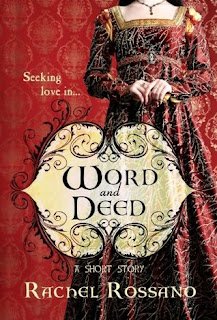 Death or an arranged marriage, Verity refuses to accept the choices.

Verity Favian's father dies unexpectedly. Her half-brother, Verdon, lays claim to all their father left behind: title, castle, and her. Verdon cannot touch the land set aside for her dowry so he offers her hand for sale to the highest bidder. Lord Silvanticus, a man renowned for his military power and close ties to the king, makes the winning bid. Despite the rumors of Silvanticus’ madness and cruelty, Verdon accepts.

Verdon locks her away in a tower. She is not sure if he seeks to prevent her from fleeing the marriage or spreading the truth only she seems willing to speak: Verdon killed their father. Either way, her time is running out.

I own about five Kindle books by Rachel Rossano, but chose to read this one first as a short introduction to her work- and frankly because, as I am part way through about three other titles, I did not want to start another full-length book yet.

Overall, I was very pleased with this short story. It rather reminded me of traditional tales, with the pretty girl locked in a tower, and paid homage to traditional ideas, beliefs and values such as chivalry, honour and true love.
Yet there was a contemporary spin, as the heroine was said to be able to use a sword. She was also strong-minded and intelligent enough to cater to modern tastes- but (and this is something I apprecaite), was not some stuck up feminist superhero. She used her brains, but was not adverse to accepting help from men, and whilst being headstrong, was also vulnerable, and her outspokeness nearly lands her in very hot water.

I also appreciated the nice, refreshing twist on the usual cliched 'forced marriage' story. I confess, I don't have a lot of time for tales like that, as they annoy me, as do the attendent myths and historical inaccuracies. As this was historical fantasy, the author could have gone along the typical route, ignoring the ban on forced marriage in he actual, historical Medieval past- yet she did not.
I don't want to give away too much of the ending but lets just say that the chosen husband is not as bad as is initially thought, and certainly does not meet the arranged marriage stereotype of horrible and abusive.
Rather he fitted in well with the over-arching theme which (I think) was about not judging people by appearances, or by what others say about them. That there may be a lot more below the surface- hence the clever title- Word and Deed. I personally guessed one of the main plot twists quite early on, but that did not really detract from my enjoyment of this story.

My only complaints were a few typos in the story which sadly slipped through the editing process, and some of the content, which might make the story more approporate for older readers, and not a YA audience. Overall though, I consider it £1 well spent.