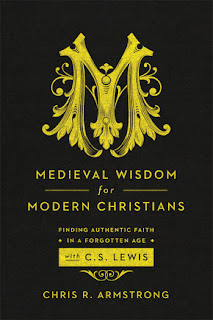 Many Christians today tend to view the story of medieval faith as a cautionary tale. Too often, they dismiss the Middle Ages as a period of corruption and decay in the church. They seem to assume that the church apostatized from true Christianity after it gained cultural influence in the time of Constantine, and the faith was only later recovered by the sixteenth-century Reformers or even the eighteenth-century revivalists. As a result, the riches and wisdom of the medieval period have remained largely inaccessible to modern Protestants.

Church historian Chris Armstrong helps readers see beyond modern caricatures of the medieval church to the animating Christian spirit of that age. He believes today's church could learn a number of lessons from medieval faith, such as how the gospel speaks to ordinary, embodied human life in this world. Medieval Wisdom for Modern Christians explores key ideas, figures, and movements from the Middle Ages in conversation with C. S. Lewis and other thinkers, helping contemporary Christians discover authentic faith and renewal in a forgotten age.

As someone with a strong interest in Medieval History and Philosophy this book appealed to me. I did have reservations about the subtitle and subject as a Protestant (I know a strange mixture- Protestant and Medievalist), but I strive for a better understanding of my period, so I requested this book from Netgalley and then acquired the Audio edition for listening to 'on the go'.

In some ways, I did now know what to expect. Perhaps a misguided 'Emergent Church' pastor gushing over prayer Labyrinths and meditation whilst just hijacking some quotes from Lewis to back up some seriously dodgy theology and dubious practices.

Instead, I was for the most part quite pleasantly surprised. The book provides a comprehensive overview of Medieval Intellectual and religious tradition, covering everything from the growth of the Universities, to the medieval notion of charity which went hand in hand with the establishment of Hospitals and institutional medical care.
On the way it challenges many deeply held myths and misconceptions about the period. The notion that Medieval people were backwards and ignorant, that science and learning were in terminal decline, that the Middle Ages were all about violence and torture- and even the notion that they believed in a 'works based gospel'.
Personally, I really go in for anything that challenges such ideas, as I firmly believe the Middle Ages has been vilified and badly misrepresented. Some of the usual suspects responsible for a lot of the misinformation today were Humanist scholars and writers of the Enlightenment era- as well as sadly some Protestant theologians.

C.S.Lewis is set up as our guide for the exploration of the time- for not only his works, but his whole worldview and mind-set was steeped in the Medieval. Lewis described himself as a 'Dinosaur' who spoke the language of classical and Medieval Learning. Well if he was a 'dinosaur' then he was a frightfully good and useful one, in the opinion of this Medievalist.
I particularly appreciated the quotations from Lewis and his fellows such as G.K.Chesterton about needing an 'intimate knowledge of the past- so set against the present' and as a foil to Chronological snobbery- to assuming that everything 'current' and 'modern' is good, and everything 'old' or 'Medieval' is bad.

More importantly, these men believed that a person could not be a proper scholar of the Middle- Ages until they thoroughly immersed themselves and 'imaginatively indwells the mind-set of the period, complete with its thoughts, feelings, circumstances and characters'. To not only be a scholar but also an 'experiencer' and ’re-enactor' of the age.
I found myself not only agreeing with, but also being inspired by such insights. I believe such an approach is vitally important to study of the Medieval (or any) time period. I am always saying 'Don't judge the past by modern standards, or expect it to measure up to it', but Lewis said it first and better.I now really want to crack open my copies of Augustine, Anselm and Boethius that are sitting on my shelf.

The only points that I did not agree with were some of the author's ideas about how to implement medieval traditions and ideas today.
After setting out the intellectual, rational and moral basis of these traditions it seemed strange for a person to seemingly show favour towards the a few moddern practices such as lighting candles and centred prayer as 'worship aids', or the worst extremes of the Charismatic movement with its flair for all things ecstatic and frankly weird.
I am very suspicious of such practices as Lectio Devina being incorporated into church practice today. I can understand medieval monks repeating passages from scripture to commit them to memory when they did not have their own copies- but we should not seek after mystical experiences, and particularly those which involve altered states of consciousness.
Nor did I agree that the 'Charismatic movements' of America in the twentieth century represented some kind of Golden Age, or point of reference that we should use medieval mystical practices to return to.
I don't think rolling around in laughing hysterics or imitating animals as we see television videos of people doing at places like the notorious Toronto Airport Church is doing the church any good and somehow, I don't think Medieval people would approve.
Would it not be better instead to learn something from the Medieval approach to Reason- which was not seen as the enemy of faith, but the defining aspect of God's creation of men, or social responsibility?

Mr Armstong certainly has a point about the importance of discipline, and the over-emphasis on 'immediatism' in our own time. I'm all for not dismissing anything Medieval as bad and unchristian, but I would be mindful about incorporating everything the author recommends into Christian life. Let us instead follow the advice of the Medieval, and use our reason and discernment rather than leaving our brains at the proverbial church door.

I would recommend for anyone who is a fan of C.S.Lewis, and interested in the Intellectual Milieu of the middle Ages. I would also recommend to anyone interested Medieval History who does not understand it, and still believes some of the misconceptions and Hollywood version. It will totally change your thinking.

I received an E-book version of this book from Brazos Press via Netgalley for the purposes of review, and purchased the audiobook of my own volition. I was not required to write a positive review and all opinions expressed are my own