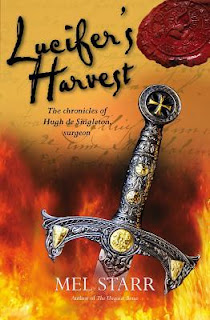 King Charles of France has announced that he is confiscating Aquitaine, and Prince Edward has sent for knights and men at arms from England to assist him in opposing the French king. Lord Gilbert Talbot is required to provide five knights, twelve squires, and twenty archers and men at arms, and wishes his surgeon - Hugh de Singleton - to travel with the party, while Hugh's wife Kate will oversee the castle.

Among the party will be Sir Simon Trillowe, Hugh's old nemesis and Kate's former suitor, who had once set fire to Hugh's house. After a brawl on the streets of Oxford Sir Simon had nearly lost an ear; Hugh had sewn it back on but it had healed crooked, and Simon blamed Hugh for the disfigurement. Finding himself in the same party, Hugh resolves not to turn his back on the knight - but it is Sir Simon who should not have turned his back.

For some who have been following this series, the length of this book proved a disappointment. It was only 150 pages, instead of the usual 225-50. I confess, I had my own reservations in that regard, but I certainly enjoyed it.
As the synopsis makes clear, this instalment of the Hugh de Singleton Medieval mystery series involves the Surgeon Hugh being accused of the murder of his long-time enemy, Sir Simon Trillowe (a knight who had courted the woman he married, and once tried to burn down his house). Against the backdrop of the Siege of Limoges in 1370, the intrepid sleuthing surgeon and his erstwhile friends Arthur and Uctred must rise above their own resentments to solve the mystery before it’s too late.

Personally, I appreciated the way that Mr Starr took this novel out of Bampton, the Oxfordshire village where Hugh and his family make their home. It’s set in Aquitaine, one of the former English possessions in France during the Hundred Years War. The setting allows for the story to explore Medieval warfare, and its impact to society, as well as introducing some of the movers and shakers of the period. Major political figures and politics generally do not usually feature in this series, but in this instalment the Black Prince, also known as Edward of Woodstock, the eldest son of King Edward III makes an appearance. Well, several appearances to be exact, which adds an interesting flavour to the story.
Of course, there are the usual historical details about everyday life and Medieval medicine as well, which are one of the things I like most about this series.

As is often the case, there is some exploration of moral and religious issues. In this case, Hugh finds his convictions tested when he must discover that happened to his enemy, and deal with his father who seems determined to see him hanged for a crime he did not commit. He would rather leave the matter well alone, but the accusation assures he cannot, and must face his enemies as well as his own resentments head on.
Regular readers should be warned that this story does have a somewhat darker and more melancholy tone than many of the previous titles, due not only to the mystery but other events which befall major characters. That should not necessarily put anyone off, but just be aware that it marks a slight diversion from the usually light tone.

Overall this was a good story, and well worth a read for fans of the series and Medieval mystery lovers more generally, though I admit it was not my favourite title in the series (I preferred book seven The Abbott’s Agreement and book five The Tainted Coin).

I requested and received a copy of this book from the publisher Lion Fiction. I was not required to write a positive review, and all opinions expressed are my own.