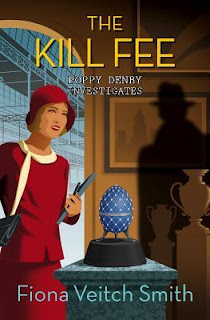 Poppy Denby, Arts and Entertainment Editor at The Daily Globe, covers an exhibition of Russian Art, hosted by White Russian refugees, including members of the surviving exiled Romanov Royal family.
There is an armed robbery, a guard is shot, and the largest Faberge Egg in the collection is stolen. The egg itself is valuable, but more so are the secrets it contains within - secrets that could threaten major political powers. Suspects are aplenty, including the former keeper of the Faberge Egg, a Russian Princess called Selena Romanova Yusopova.

The interim Bolshevik Russian ambassador, Vasili Safin inserts himself into the investigation, as he believes the egg - and the other treasures - should all be restored to the Russian people. Poppy, her editor Rollo, press photographer Daniel, and the other staff of the Globe are delighted to be once again in the middle of a sensational story.
But, soon the investigation takes a dark turn when another body is found and an employee of the newspaper becomes a suspect...The race is on to find both the key and the egg - can they be found before the killer strikes again?

The second and latest instalment in the Poppy Denby Investigates Series was an excellent historical mystery, with many complex interwoven threads. The historical background surrounding exiles of the Romanov royal family, and lost treasure was fascinating and worked very well. Alongside this there was love, drama and intrigue- even a secret tunnel.

However, I must say, I did not enjoy it as much as the last book The Jazz Files. I can’t put my finger on exactly what it was- perhaps it was the length of the novel. It just seemed to drag, carrying out plotlines and leads which could have been followed and resolved sooner. Also at times, things got a bit mudded, with so much going on and the timeframe becoming confusing with the switching viewpoints.

Also, whilst the characters were believable, and I did enjoy reading about those like Rollo the editor, Daniel and Ivan Molanov (who gets his own story and a great resolution), the depiction of some of them seemed inconsistent with their behaviour. My main issue was with some of Poppy’s attitudes. She came over in this story as one of those overbearingly militant Feminists one sees too often in fiction, who shoot their mouth off at men for simply wanting to protect them and keep them out of danger. Now, I believe in women’s rights and equality, but I don’t believe women should be stupid and recklessly put themselves in perilous situations just to prove how ‘strong’ they are.
Her attitude to her parents also did not seem consistent, as the last book gave the impression Poppy loved and was close to her parents, rather than resenting them for not being liberal enough.

Personally, I did feel there was certain pro-Bolshevik slant in the story. So maybe Tsar Nicholas II was a despot- but the people who replaced him were far worse. Stalin is estimated to have killed as many as 50 million people. Perhaps in 1920 their more tyrannical tendencies were not yet apparent, but most of the characters seemed to consider Stalin and Lenin to be quite likable, honourable chaps.

I would certainly be interested in the next instalment in this series (maybe Poppy well end up in Egypt after all), I just hope for a little less Political Correctness.

I requested a copy of this book from the publisher. I was not required to write a positive review and all opinions expressed are my own.