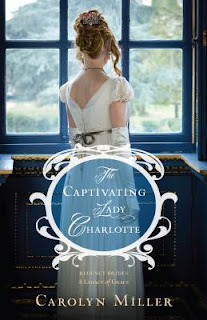 Lady Charlotte Featherington is destined for great things on the marriage market. After all, as the beautiful daughter of a marquess, she should have her pick of the eligible nobility hen she debuts. She, however, has love at the top of her list of marriageable attributes. And her romantic heart falls hard for one particularly dashing, attentive suitor. Sadly for Charlotte, her noble father intends her betrothed to be someone far more dull.

William Hartwell may be a duke, but he knows he was Charlotte's father's pick, not the young lady's own choice. And the captivating Lady Charlotte does not strike him as a woman who will be wooed by his wealth or title. While she has captured his heart, he has no idea how to win hers in return--and the betrayal and scandal his first wife put him through makes it difficult for him to believe that love can ever be trusted. His only hope is that Charlotte's sense of responsibility will win out over her romantic notions.

Can a widowed duke and a romantically inclined lady negotiate a future and discover love beyond duty? Will they be able to find healing and hope from the legacy of grace? Poignant and charming, this is another beautifully written, clean and wholesome Regency romance from Carolyn Miller.

The second title in the Regency Brides series was a wonderful continuation, complementing the first book. This was once again a wonderfully well-told story with realistic characters and evocative scenery. Although the arranged marriage to between hurting and seemingly unsuited characters is a formula which has been used before (rather often), I did not come across as tired or cliched in this novel.
In fact, I loved the character of William, Duke of Hartington, the quiet and rather reclusive character judged by society, who really had so much to offer, and was a much better person than he seemed. Certainly, a lesson about not judging by appearances to be learned there.

In fact, the heroine Charlotte learns and matures throughout the series: many of the important passages about the nature of love were deservedly highlighted in the Kindle edition many times. They are profound words to think upon. I could argue that learning about what love really meant was the central theme of this book, and was something both the characters had to do. Again, as with the last book, the faith elements worked well in the story- except, it must be said, in one or two passages.
Readers of the prequel will enjoy seeing the return of characters from it, especially Charlotte’s cousin Lavinia and her husband Nicholas, and their formidable Aunt Patience. They weren’t just cameos with walk on roles either but had important parts to play alongside the hero and heroine, and even got their own minor storyline. I don’t want to give anything away but will say that this story does not shy away from exploring difficult subjects.

However, towards the end of the book, I felt something started to give. Perhaps it was that the story of Charlotte and William’s developing relationship was drawn out too long, but they both started to exhibit some very annoying, dare I say, immature behaviour. Taking offense at the most trivial things, sulking, and flitting from one emotion to another. Something that could have been resolved quite easily by their just talking things out, and believing each other, which neither had any reason not to do by that point. I got rather tired of Charlotte agonizing over her changeable feelings, and then William turned around and started acting like a brat too. One of those moments when you just want to knock the characters’ heads together.
The ending was also a little far-fetched and melodramatic for my liking. It was resolved and wrapped up yes, but could have been better. Overall though, I did enjoy this story and thoroughly recommend it for lovers of clean Regencies.

I requested this title from the Publisher, Kregel. I was not required to write a positive review and all opinions expressed are my own.

For the rest of this week, both titles in Carolyn Miller's series are on sale on Kindle for $3 for the pair. Click the pictures to visit Amazon and take advantage of this great deal, which is available internationally.