That time of the week again! Of course,  we don't celebrate Thanksgiving in the UK, but I can still wish all readers in the USA my best wishes for the day. We're eating duck in blackberry sauce, follow by lemon tart for tonight, its not a special occasion, just a girl's night in, with a movie rental from Amazon video for after.
Sadly, I have also had to take my computer in for repair, because it had a little accident. With all my links and bookmarks on it, being without it is a pain. The 'quotation' button on the computer I am using now does not seem to work, so please bear with me on the odd formatting of this post.

Today I'm featuring the first line of a new book from British author Philippa Jane Keyworth. She is author of three Regency novels The Widow's Redeemer (2012), The Unexpected Earl (2014) and Fool Me Twice (2016), and has another book coming out in exactly a week. Its fantasy, and because its different from her other titles, the author has used her initials instead of her full name.

I have the pleasure of being one of the Advanced Readers for 'The Edict' and I plan to start on it soon. 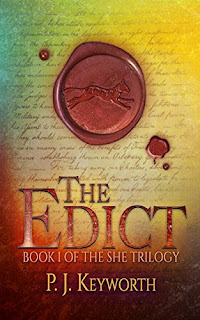 Amidst robberies, prison breaks, palace intrigues, and an oncoming war, the struggle for peace rests on the shoulders of unlikely allies...

The Reluwyn Empire of Emrilion spans from the Northern Moors to the Tao Desert. The Laowyn, a people chosen by the Spirit, are subject to the Regent’s harsh rule on behalf of the Prince and a raft of oppressive Edicts is about to tip the scales toward rebellion. The Laowyn Resistance defend against persecution but the Regent Garesh’s stranglehold on power is unrelenting. In a bid to solidify his position he arranges for the Edict of Maidens to gather all eligible brides for the Prince’s choosing that the royal might ascend the throne as King with Garesh at his side as rightful power-wielder.

Kiara, a Laowyn woman whose race remains a secret, is chosen for the Prince but before she can be taken she escapes under the guise of a boy. Falling from one captor to another she eventually comes face-to-face with the man she loathes and suddenly two very different worlds collide.

The Edict is an epic fantasy and love story forming the basis of a trilogy that will see the fantasy world brought to the brink of destruction with only a chosen few capable of protecting it.

"Before the guttering fire was allowed to flicker into oblivion, a small servant scurried over to bank it with fresh logs. Smoke billowed out from the irritated fire but did little to cover the stench of fever, and now in these late stages, of putrefaction."