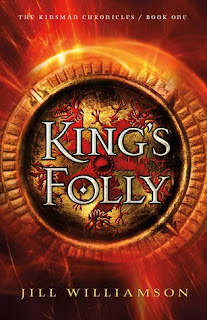 The gods are angry.

Volcanic eruptions, sinkholes, ground shakers--everything points to their unhappiness. At least that is what the king of Armania believes. His son, Prince Wilek, thinks his father's superstitions are nonsense, though he remains the ever dutiful First Arm of Armania.

When a messenger arrives and claims that the town of Farway has been swallowed by the earth, the king sends Wilek to investigate. But what Wilek discovers is more cataclysmic than one lost city. Even as the ground shifts beneath his feet, Wilek sets out on a desperate journey to save his people and his world. But can he do it before the entire land crumbles?

This must have been the longest book I have read in a good while, and nearly 550 pages. Epic Fantasy is the word: as in long, so the division into three parts did help. So what was my impression? It was a good book, and I would read the next (though I expect that will take me a good few months as its even longer), but I don't count it among my favourite fantasy novels. The downside of having the Netgalley version was no interactive menu, so I could not switch back the character list to remind myself who was who: until I borrowed the Kindle edition.

There were a lot of characters, which interconnected stories, at it was hard to keep track of what was going on at times. Personally, I was not sure about the world building either: the eclectic mix of Medieval type culture with Castles, with elements of Biblical Hebrew (polygamy, lots of gods) ancient Middle Eastern/Egyptian and a few details that seemed decidedly modern did not really work for me.
Once I got into the story, that was not such a problem, but I never really felt totally immersed in in the invented world, so to speak.

I know some people have complained about certain content in these stories: the fact that many characters have mistresses, and that there is a female, Amazon-like culture whose sole purpose seems to be to seduce and enslave men using black magic. I did not find that to be much of an issue because of the way it was treated (not as a good thing). So, this book's not according to everyone's taste, but fantasy fans might like it.

I requested this book via Netgalley, and then borrowed a copy via Kindle Unlimited. I was not required to write a review and all opinions expressed are my own.