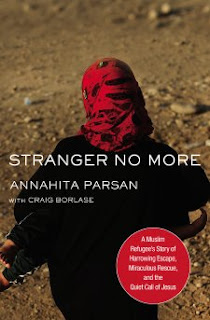 
"There will be pain ahead, and trouble and problems that I won’t be able to fix on my own.
But in them all, I know God will be there, calling me to look to him. Inviting me to take the next step toward his open arms.
And I will say yes. And yes. And yes."


Annahita Parsan was born into a Muslim family in Iran and grew up with the simple hope of one day finding a good husband, having children, and doing some good in the world. Married and a mother before she turned eighteen, Annahita found herself unexpectedly widowed and trapped for years in an abusive second marriage that she later fled—discovering instead a God who might love her.

Stranger No More is the remarkable true story of Annahita’s path from oppression to the life-changing hope of Jesus. Fleeing Iran across the mountains into Turkey, she spent months in the terrifying Agri prison before a miraculous release and flight to Europe, where she and her two children knelt in a church and prayed, “God, from this day on we are Christians.”

Filled with unthinkable circumstances, miraculous rescues, and the quietly constant voice of Jesus, Stranger No More leads readers deep into the heart of God and draws them toward the same call that Annahita heeds today: using her past to save others from theirs. As the leader of two congregations in Sweden, Annahita has baptized hundreds of former Muslims since her own conversion, has seen firsthand the powerful ways God is at work among those who have left Islam behind, and is reminded every day that saying yes to God is always worth the risk.


This isn't an easy or 'light' read simply because the author suffered so many tragic and painful experiences of domestic abuse, and even torture in prison.

Ultimately though, its a story of victory and overcoming the odds, as Annahita finally chose not to allow her circumstances to destroy her, and her children. The account of her conversion and later ministry among other Muslim refugees comes only at the end, providing a lovely lesson in how a life can be transformed by God's love.

I have a few complaints though: I'm sure some of the early promotional material said that the author was a Sudanese refugee, and I must confess, that was one of the reasons I requested this book: because I thought it might include insights into the situation in Sudan during the last few years. Turns out she was actually Iranian and escaped the country in the 80s. Not that it really makes any difference.

Second, along with other reviewers, I feel some of the things that happened to her were a result of poor choices on her own part, and so could have been avoided, or a tendency to follow the lead of others, without really seeking the will of God. She became a Pastor primarily because her pastor said she would one day, for instance. I guess its a reflection of reality, in which we all make poor choices, so I should not really judge.
I was also slightly concerned about her associations with the modern hyper-Charismatic movement, and the implication that her siblings accepted Jesus as a result of attending a service in which they were 'slain in the Spirit' - basically falling over. I wonder if there was more too it than that, and seeing the change in her life might have been part of the equation too.

Otherwise though, a good read, and recommended for those interested in real-life stories, and lovers of the biography genre.
I requested this book from the Publisher via Booklook Bloggers and requested the audiobook of my own volition. I was not required to write a positive review, and all opinions expressed are my own.