Regency Brides: A Promise of Hope #1 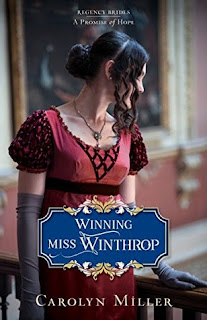 Catherine Winthrop has cried out to God too many times to count. Years ago, the man who stole her heart rejected her--and she's never recovered. Now tragedy has brought him back into her life. This time it isn't her heart he's taking, it's her home and her family's good name--and she has no one to share her grief.

Jonathan Carlew's life may look enviable from the outside--wealthy, handsome, landed--but the mystery surrounding his birth has shadowed his entire life. Now as he ascends to the barony, fresh challenges await, including a scheming mama who wants him to embrace power, even at the cost of losing love. How can he remain the kind, honorable man he strives to be and still meet the demands of his new society responsibilities?

These two broken hearts must decide whether their painful past and bitter present will be all they can share, or if forgiveness can provide a path to freedom for the future.

I discovered Carolyn Miller last year, with The Elusive Miss Ellison, the first novel of her first Regency Trilogy, and I quickly came to rank her as one of my favourite authors of Regency Fiction/
Fans and new readers alike should be delighted with this first installment in her new series, which follows a character who was mentioned a few times in the first series but stayed on the sidelines. That young lady was Catherine Winthrop, daughter of a country baron, and erstwhile friend of Lavinia Ellison.
Her story is reminiscent of that of Anne Elliot, the heroine of Jane Austen's 'Persuasion', who encounters a former suitor, years after he jilted her and left her heartbroken.

Indeed, this novel, like its classic counterpart, has much in its favour, with the beautiful descriptions of the landscape of Gloucestershire, and the city of Bath, as well as some of the outfits worn by the female protagonists. The characters, old and new, were well-drawn, and it was lovely to see Lavinia Ellison, from the last books, finally get something she had wanted for a long time. Yet at times, I felt that there were a few too many characters to keep up with, and I struggled to remember who they all were and how they were connected. The family tree in the front helped, but did not cover everyone.

On a personal level, I think I really related to Katherine, who wanted to settle down and marry but had serious confidence issues which made her think herself unlovable, in light of my own struggle with singleness.
The theme of forgiveness was also very well presented. It bears mentioning that it was connected with the faith element in the story, which was very strong. I did not feel that detracted from it, but I know some readers prefer to have such content mentioned upfront.

I do feel that the main obstacle to the romance between Catherine and Johnathan Curlew/Winthrop the hero was a little on the cliched side.
As with many romance novels, they were kept apart mostly by misunderstandings, which could have been solved, in some part, by better communication. I understand that this is central to the story, but both of them came over as a little melodramatic from time to time. Then again, even Austen's heroines could be melodramatic: Marianne Dashwood being a prime example.

My only other complaint was the occasional Americanisms and a couple of incidents towards the end which came over a little bit implausible. Those weren't enough to spoil my enjoyment of this excellent novel though.Recommended for all fans of the Regency Fiction and Inspirational Romance genre.

I signed up for the Kregel Blog Tour of this title and received a free ebook edition via Netgalley. I was not required to write a positive review, and all opinions expressed are my own.